On December 30, 2014, Canadian firefighters in Peel Region rescued a German Shepherd from the frozen waters of a pond, after the pet walked on top of the thin ice and fell through. 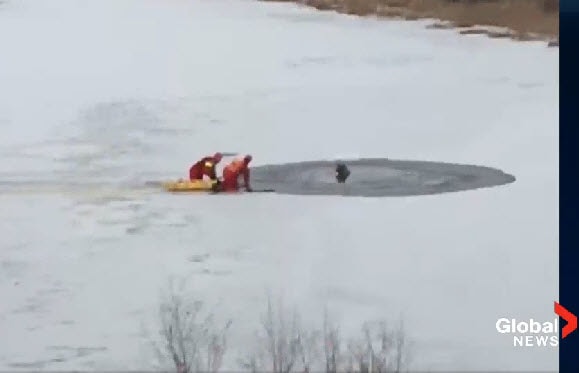 It was 12:30 p.m. when a local resident near Heart Lake Road and Mayfield Road in Brampton, spotted the lonely pet stranded in the middle of the icy pond. When the emergency call was made, the canine had not fallen through the ice, but by the time rescuers arrived on the scene, the pet was already struggling to stay afloat in the water.

Emergency responders wore protective water gear and tried to remain on the frozen surface, however, they too broke through the ice. Rescuers quickly reached the pet and pulled him out of the water. 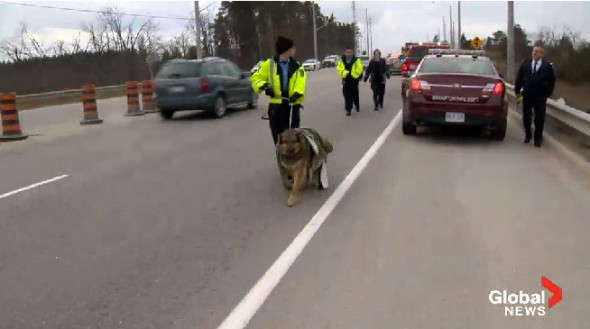 “We went out and we were able to get him into a basket and pull him in,” Jason Michel told Global News. “He seemed pretty happy to see us. He seemed pretty energetic once he got out of the water.” 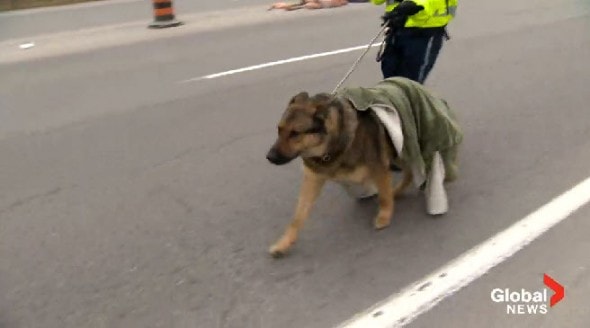 The dog was wrapped in blankets and dried off. He was then taken to Animal Control for evaluation and later reunited with his owners.

The dog’s name is Blaze and a friend of his owner saw the rescue video on the news. Jill Gillan, the dog’s owner, was unaware of the adventure her pet had been on, but when she received her friend’s call, she immediately headed to Animal Control to claim her pet. A day later, Gillan and Blaze stopped by the fire house to personally thank the heroes who saved the dog’s life.