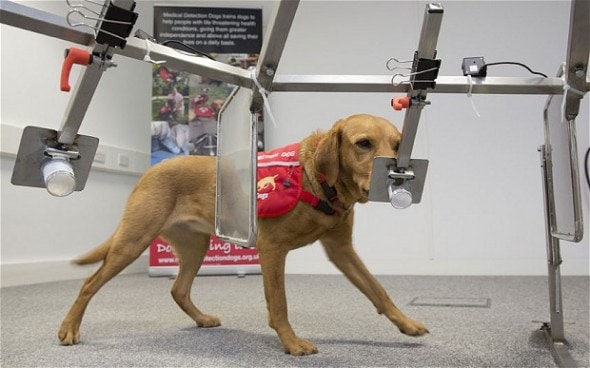 When Dr. Claire Guest began training her dog Daisy to be able to detect cancer, she had no idea that it would help save her own life. The first person Daisy would help diagnose was Dr. Guest.

Back in 2009 Dr. Guest was training her Labrador retriever Daisy to use her sense of smell to detect chemicals given off by tumor cells. It was during this training process that Daisy started acting weird around Guest. “She kept jumping up on me,” said Guest. “One day she bumped into my chest with her nose. It was unusually sore, and there seemed to be a lump there.” Daisy’s anxious behavior continued and Guest heeded the warning and got checked out. A biopsy revealed that she had breast cancer.

Guest has undergone treatment and is in good health these days, thanks to Daisy’s early detection.  “Had I not had Daisy’s early warning, I would have had a very poor prognosis,” said Guest. “I have my dog to thank for the fact that I’m standing here today.”

Daisy was just a puppy when she first detected Guest’s cancer, now she has become more advanced in her detection. She detects different types of cancers through smelling a patient’s breath, urine or skin. There is some skepticism in the medical world about the science behind dogs detecting cancer but Guest and her charity Medical Detection Dogs strongly believes in it. “Some days are better than others, but her accuracy rate is at least 76 percent,” said Guest of Daisy’s abilities.

Dr. Guest and her charity continue to work to win over the skeptics by gathering data and performing studies that support the science behind dogs detecting cancer. “We need funding to carry out conclusive studies on a larger scale,” she said. For more information about Medical Detection Dogs and their work visit their website at www.medicaldetectiondogs.org.uk.