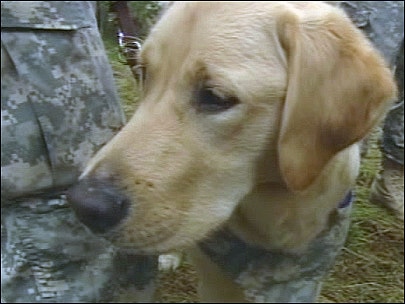 Meet Sgt. First Class Zach, the newest member of the Combat Stress Control unit of the 98th Medical Detachment at Joint Base Lewis-McChord.

He’s part of an elite team of stress combatants – psychiatrists, psychologists, dogs and nurses, all ready to help soldiers deal with the stress of war. Trained by civilian group America’s Vet Dogs, Zach was then turned over to the Army where he was assigned to a handler who helped him to hone his skills prior to deployment.

While many members of the military are uncomfortable talking to medical professionals about stress, dogs make for great ice breakers and help soldiers in therapy to open up. As a result, similar programs are gaining support in other branches of the military, but not fast enough – as of now, there are only eight combat stress dogs in the  US Army.

Zach and his team will be deployed to Iraq in the next few weeks.

4 thoughts on “Canine Detail: Dogs Defray the Stress of Battle”