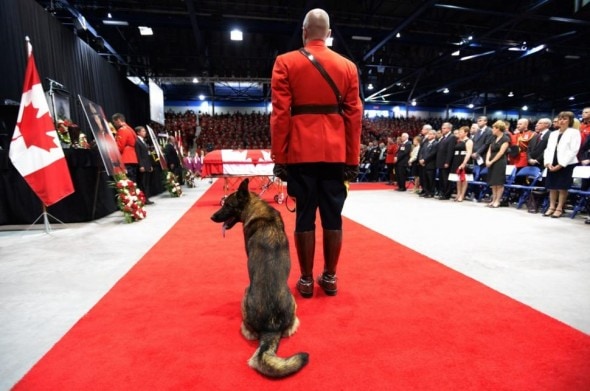 Const. Dave Ross was one of three Canadian Mounted Police officers reportedly slain during a Moncton man’s Shooting rampage last week.  A memorial service was held for the fallen officer where Danny, a German shepherd who was also Ross’ partner, was a guest of honor.

It was said that Danny could be heard whimpering during his human’s funeral.  Friends, family, and fellow officers gathered together in a hockey arena, which was required for the large turnout for the funeral and memorial service. 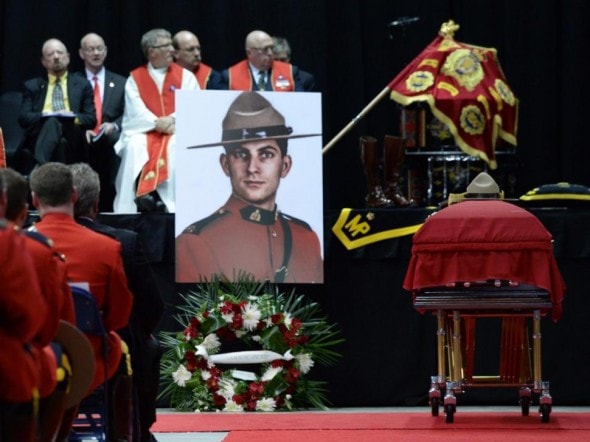 Ross was a police Dog Services handler.  He had been teamed up with Danny, and they were together since December 2012.  His family said he “took a lot of pride” in being with Danny, and what he did with the Canadian Mounted Police.  It could be said that Danny felt exactly the same way.

“Anytime Danny barked at home, it would be to get Dave to open the truck door so they could go to work,” Ross’ wife Rachel said.

While the procession was taking place, observers said Danny could be seen padding alongside his best friend and work partner’s casket, and could be heard whimpering throughout the ceremony.  At one point, in what was described as an attempt to find any trace of his buddy, Danny had been sniffing at Ross’ Stetson. 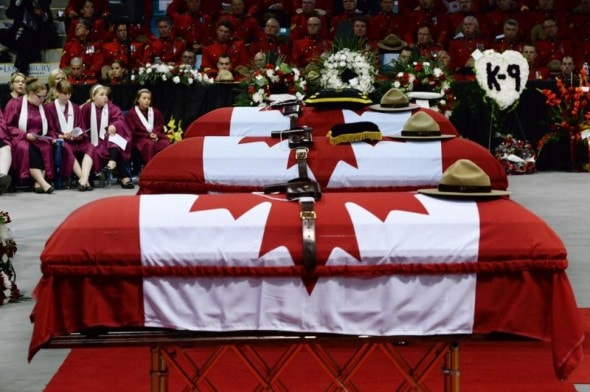 Even though the RCMP said it is highly unusual for police service dogs to change handlers, Danny will be kept as part of the crime-fighting team he has been with since 2012.  A new potential handler has been found, and there will be a trial bonding period they undergo to be sure Danny will still perform just has well as he always has with his team.

“It wouldn’t be fair to Danny to retire him as he loved his work as much as Dave did,” said Rachel.

Ross had been prepping dinner as he got the call about the shooter at large.  He immediately dropped everything he was doing to respond.  He didn’t even close the barbecue grill lid he had been cooking at, and the garage door had been left open to make as quick of a response as was possible.  Ross was very dedicated.

“For those closest to Dave, that barbecue left still open says everything about who Dave was and his devotion to those around him,” said Dave’s brother-in-law, Adrian Vander Ploeg, during his eulogy.

Justin Bourque is the man charged with three counts of murder after allegedly being responsible for shooting and killing Ross and his colleagues.  The names of the other two officers slain in the course of duty were Const. Fabrice George Gevaudan, 45 and Const. Douglas James Larche, 40.

Bourque’s trial is set to begin on the 3rd of July.

The video below was posted to YouTube, and shows that even though Danny has lost his partner and best friend, he is doing alright and is still being well cared for.