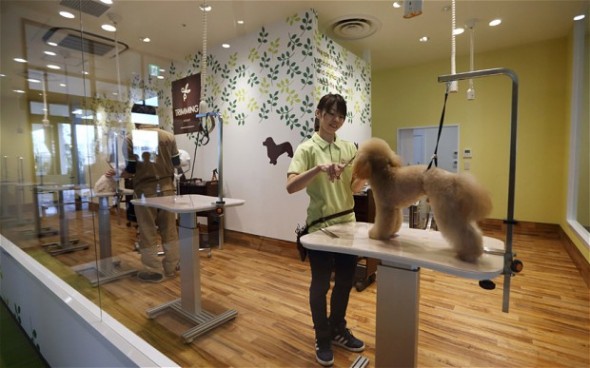 A pet company in Japan has opened a nursing home for older dogs which will provide round-the-clock vet care, a specialist guy, and even a swimming pool!  This is offered as a positive option for families with older pets that can be harder to care for.  Hopefully, this will keep people from just abandoning their older dogs, or putting them down.

Aeonpet Co., which is a subsidiary of the Aeon supermarket chain, is the company responsible for starting the idea.  The first site is opening at a shopping mall east of Tokyo, and has spots for an initial intake of 20 dogs.

“We decided to open the nursing facility because so many dog owners have requested something like this,” said Nanako Oiishi, a spokesperson for the company.

“Many Japanese people have pets now, but of course they get old and it can be difficult to care for them.”

Along with having vet services with a dedicated doctor on call at all times, there is a large grooming room, and owners will be able to stay with their animals as they live out the last days of their lives in comfort and luxury.

Aeonpet’s president said his intention is to use the first dog retirement home as a method to establish a second to none and available nowhere else.  They also hope to “establish an industry standard” in care for our older pets.

Aeonpet is already the largest pet company in Japan.  There are more than 170 stores, and 59 hospitals for pets in operation throughout the country.

Improved living conditions and health services for animals mean that the majority are living far longer than in the past, while new laws that went into effect in Japan last year make it a legal obligation for pet owners to take care of their animals until they die.