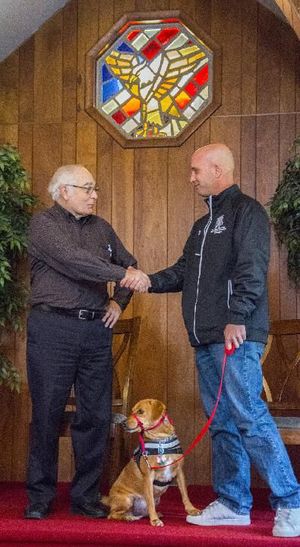 A veteran from World War 2 and one from the Vietnam War got together to present a vet of the Iraq Wars with the first therapy dog trained by Canines for Vets.  A ceremony was held in which the leash to King was handed over to a vet in need.

Rob Bush was in Hermitage, Pennsylvania on Wednesday for the ceremony.  The very first specially trained therapy dog for soldiers with PTSD, King, was given to Bush as a thank you for his service, and Canines for Vets hopes to be able to train and home more therapy dogs with soldiers in need.

Like many of the men and women returning from fighting over seas, Bush came back a very changed man.  He suffers from post traumatic stress disorder (PTSD), and the symptoms can be downright debilitating.  King will help Bush out when things get too overwhelming, which is something he’s been looking foreword to.

“He has a loyalty and dedication toward me you can’t find anywhere else other than your family,” Bush said.  “He always has a smile on his face.  He’s always glad to see you.”

A simple “Leash Giving” ceremony was held to commemorate the moment.  Richard Burns, another war vet donated King to Canines for Vets, and was also on hand to give King over to Bush.  Burns is just happy to be giving back to his community and a fellow soldier.