Two dogs from Wayne, West Virginia luckily weren’t hurt when their human left them in a running vehicle in a Walmart parking lot while they went in to shop.  Somehow, one of the dogs managed to knock the car into gear.  It slowly rolled foreword and “crashed” into the store, causing quite a scene, but again, no one was injured in any way.

At a snail’s pace, the car inched closer to the store.  The witness just stepped aside as the vehicle came to rest against the front of the store.  She took a look in the car, and sur enough, there were the two dogs looking back at her.

The store staff paged the vehicle’s owner over the loud-speaker.  It turns out the owner was an older woman shopping in the store.  She came out and saw what had happened, and couldn’t believe that one of the dogs actually got the car into gear.  She only left it running so the dogs wouldn’t overheat in the car while she was in the store. 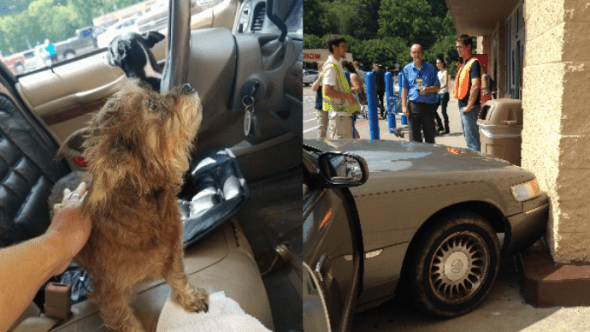 2 thoughts on “CAR-MA Strikes! Dogs Left in Running Car Crash it into a Walmart”