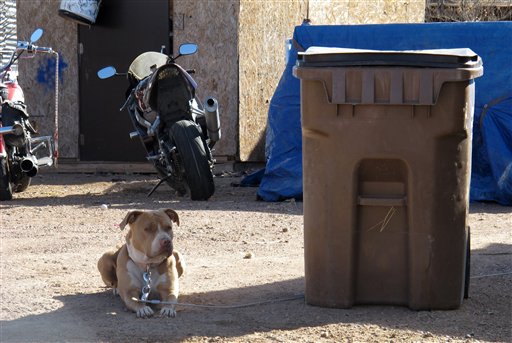 In the rural communities east of Albuquerque, dogs have been disappearing.  From inside kennels, yards with locked fences, and inside homes pets were vanishing and owners were heartbroken.  When a dog owner recently came home and saw someone driving off with her pit bulls, they gave chase prompting the thief to toss the dogs from the moving vehicle, and cracking the case wide open.

Debbie Swenerton, who was arrested on November 16th is suspected of taking the stolen dogs to shelters in other states and claiming that they were strays.  She was charged with cruelty to animals, burglary and false imprisonment. Edgewood animal control officer Mike Ring feels it may a case of an overzealous effort of a larger network of local activists who are concerned about the treatment of animals in rural areas, where many dogs are tied up, live outside or are allowed to roam freely.  To date, no one else has been arrested but the investigation is ongoing.

Quinn Kirby is Swenerton’s lawyer and said in an email, “Debbie cares deeply about animals and dedicates a great deal of her time and resources to animal welfare. It is outrageous to suggest that someone like her would do something so heinous as to throw a dog out the window of a moving car. Debbie has not committed any crimes and we are confident that she will be exonerated.”

One of the dogs thrown from the car suffered some road rash but otherwise they are fine.  A friend of Swenerton’s, Barbara Tellier says that she believes Swenerton is being set up for trying to raise awareness about the treatment of dogs in the area.  “Debbie is making waves,” Tellier said. “She is emailing everybody trying to get help for these animals who are locked outside without enough shelter, or not enough water in the summertime, or running loose to get hit by a car … and nobody is doing anything.”

According to Ring, at least 60 dogs have been reported missing in the last 2 years.  “It’s a sad story when people are calling to report their animals are missing,” he said. “You can hear the emotion in their voice. Some of them have children. These are family pets. It’s heartbreaking, some of these cases.”  Melissa Crozier’s dog Simba recently went missing from her home.  She said, “I came home and he was gone. I have no idea how he could have gotten out” unless someone opened the door.

Swenerton has long been suspected in this case as she is known by law enforcement and animal control authorities in Torrance, Bernalillo and Santa Fe counties for calling to report suspected animal abuse. In most cases the animals were fine, with food, water and proper shelter. In most cases, they were also outside.  Torrance County Undersheriff Martin Rivera says “she felt she was doing the right thing. … I think she just wanted to save these animals.”