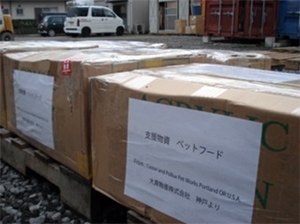 CLACKAMAS, Ore.—(March 22, 2011)— Continuing the tradition of giving and remembering those in need, Castor & Pollux is donating thousands of pet meals to those affected by the disaster in Japan.

Monday, March 21 Castor & Pollux launched a charitable campaign on Facebook, donating a pet meal for each of its 10,344 Facebook fans, and announcing an additional donated meal for every new fan gained by April 3, 2011. Fans were asked to encourage friends, family and other pet lovers to like the Castor & Pollux Facebook page to try and double the initial donation to a total of 20,000 pet meals. Enthusiastic fans have made the campaign an immediate success by adding over 2,500 pet meals in just 24 hours.

The first shipment of food has arrived in the Ishinomaki Prefecture in Sandai, Japan and is on its way to being distributed by the pet rescue group, Ark. The next shipment of 2,100 meals is shipping soon. Updates on the donation process can be found on www.facebook.com/castorpolluxpet.

About Castor & Pollux Natural PetWorks
Castor & Pollux Natural PetWorks is a leader in organic and natural pet products. Their ORGANIX® product line was the first certified organic pet food to meet all of the labeling requirements established by the USDA’s National Organic Program. Other featured product lines include Natural Ultramix® natural dog and cat foods and treats, GOOD BUDDY® dog cookies and rawhide.

Since its founding, Castor & Pollux has donated more than 3 million meals to pets, and has established its PetWorks Partners program to continue its support of non-profit pet organizations.