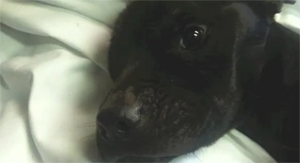 The Guilford County Animal Shelter recently released this video, and I was floored when I saw it last night. Chamberlin was abandoned in an overgrown yard and was found while it was being mowed. By the time he was discovered he was emaciated and his front legs had stopped functioning properly. He’s found new hope thanks to Susie’s Fund, and now can begin receiving the medical help he needs in order to recover. He remains in the custody of the GCAS until he is healthy enough to be adopted.