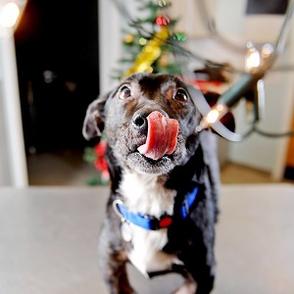 Thanks to his veterinarian, it won’t be lights out for Charlie who ate a string of Christmas recently.  When his owners noticed wires in his feces they took him to the vet and x-rays revealed that he had consumed the lights, unbeknownst to his family.  Thanks to life saving surgery Charlie, a 7 year old cross breed will get to enjoy another Christmas.

This wasn’t Charlie’s first misadventure in eating, he once ate his owner’s (Sharon Fay) scarf.  “Back in March he ate one of my scarves and needed an operation to remove it, but I thought it was just a one-off incident as he hadn’t shown any signs that he was going to be a repeat offender. I’ve had dogs all my life and have never known a dog act like this before.”

In addition to the tangled string of lights, a shoelace was also found in Charlie’s stomach.  PDSA senior veterinary surgeon Sophie Bell said that she had never seen a case like this before.  “Over the years I’ve seen plenty of cases of dogs swallowing strange objects – socks, dummies, rubber ducks, but it’s the first time any of us have treated a dog that has actually eaten fairy lights,” she said.

Fortunately for him and his family, Charlie has recovered and is now back at home, with his family keeping a watchful on him and their Christmas lights.