Police officer Anna M. Richardson’s account of Charlie, a rescued dog that learned what it meant to be home. 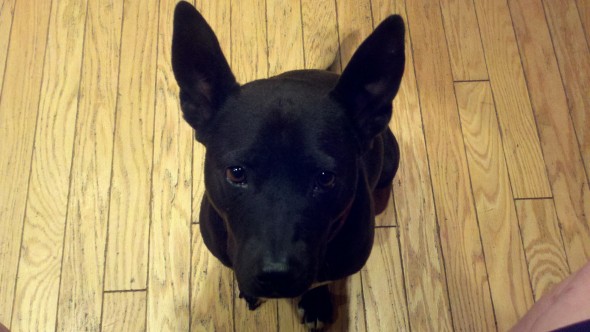 Back in 2009, I had been on a domestic call in East Tampa and was inside the victim’s home.  When I exited the house, I noticed my partner, Officer Shane Gadoury, closing the back door to my police car.  This was particularly odd because we were not riding in a two-person capacity that day, and he was not the back-up officer dispatched to the scene with me.  I knew instantly, he was up to no good.

When he looked up, his faced contorted into the look you see when a child gets caught doing something they should not be doing.  Before I could speak, he yelled out, “I couldn’t leave him there.”

I knew immediately what he was talking about.  Shane and I had all too often run across an injured, sick or emaciated stray dog that we could not drive past during our patrol in East Tampa.  We often took turns taking those dogs home, rehabilitating them and then finding their forever home.  I had just re-homed a red pit bull that I had for six months, on top of my own family of four: two Chihuahuas, a Doberman and a Great Dane.

It was Shane’s turn and my instant response was, “No! It’s your turn,” as I made my way towards my police car.

Shane pled with me arguing that he had three dogs at home and was about to go on vacation.  “Shane, I have four dogs!” I countered, as if he didn’t know.

His weak argument was won the minute I opened the back door to see the passenger. Inside I saw a terrified, cowering pit bull mix with eyes that reached right down inside your soul and begged for mercy.

I quietly shut the door.  I didn’t say another word.  I shook my head yes as a haunted sadness filled my heart contemplating how the human race could be so cruel to man’s best friend.  My partner leaned in and said, “That’s why God made people like us…for them, Anna.”

As I drove home that night, I could see the fear in the back seat passenger’s eyes as if he wondered what fate he would endure next.  I promised myself that I would not name him because that last dog, Ivy, stayed too long and tugged tightly on my heart strings when she was re-homed.  My intention was to quickly get this dog into a foster home with another group.

The first 24 hours proved difficult as I quickly learned that this dog had never been inside a house, walked on a tile floor, ridden in a car and most likely obtained the scars around his face from other dogs trained to bite him.  I had to carry his 55 pound frame into the house and one by one tried to introduce him my pack, which didn’t go so well.  He flattened his body against the ground and urinated in submission at the sight of the first Chihuahua.  The vision of the Great Dane through the screen door put him over the edge and sent this poor baby running and yelping across the yard into the hedges that lined the back fence.

During the first week, I reached out to several rescue groups with which I worked and to everyone I knew that was looking for a companion.  I needed to call him something rather than “DOG”, so I decided to refer to him as, “two-nine,” this being the street on which he was found in East Tampa, 29th Street.

St. Francis Society Animal Rescue in Tampa agreed to run him through their organization for adoption as long as I agreed to foster him.  He slowly gained a sense of trust with me as the days went on, and he became the Velcro dog that I could not walk away from for even a minute.  At the end of that first week, I introduced him to a dear friend and co-worker at the time, Corporal Sheila Griffin.  Two-nine and I had rehearsed their introduction before she arrived.  I told him that she lived on ten acres and was a pushover for a sweet face.  As if on queue, as soon as she sat down, Two-nine placed his big black paws up on her chest and rested his chin on her shoulder with a big sigh.

Of course, Sheila assured me that she could not take this dog, however I could not keep calling him Two-nine.  He looked into her eyes and she said, “I see you Charlie Bear,” and in that moment, Two-nine became Charlie Bear.

Sheila’s father Wendell was aging and lived alone.  We decided Charlie was the perfect dog for him, whether he wanted him or not.  We were convinced that he just didn’t know he needed the love of a dog yet.

Sheila and I conjured up a grand plan to “save” Charlie.  She explained to her father that I was taking Charlie to a vet in South Tampa but also had a several appointments and meetings right afterwards.  Since I lived quite a distance from South Tampa, she asked Wendell if Charlie could stay there for the day until I finished up my appointments.  Wendell was just too sweet to say no.

As I walked Charlie into Wendell’s home, that big, bad pit bull made his way to Wendell’s recliner chair, and ever-so-gently placed his paws and head into the old man’s lap with his big brown eyes soulfully looking upward.  I think it was love at first sight.

By the end of a six-hour visit, Wendell called Sheila and told her that Charlie could spend the night if I was too busy to pick him up.  High-five, plan was working.  Wendell kept Charlie for three days, but sadly, Charlie proved too strong for Wendell and he asked me to come pick him up.  Charlie was scheduled to go to the Florida State Fairgrounds Pet Adoption Expo the next day, and I was convinced this sweet boy would be adopted. I was going to pick him up the next day for the Expo.

On the morning of the Adoption Expo, Sheila called me and relayed the conversation she had just had with her dad.  Wendell had been at the kitchen table drinking his coffee and reading the paper when he saw a full page add for the Adoption Expo.  He asked Sheila if that was where Charlie was to go today.  She said it was, and Wendell worried himself with who Charlie’s new family would be.  “How will we know if Charlie goes to a good home? he inquired.

Sheila explained that there were, of course, no guarantees, but rescue groups generally screened prospective pet parents.  “Well what if Charlie doesn’t like his new home?” Wendell went on.

Sheila shrugged, and Wendell continued, “Well I don’t like that one bit. You just call Anna and tell her Charlie is not going anywhere.  He’s not going to that adoption thing.  He’s going to live with me.”

And so began a love affair between Wendell and Charlie.  The next time I saw Charlie, he had gained quite a bit of weight.  I asked them what they were feeding him.  Wendell told me that he didn’t eat that “crappy” dog food that we gave him; so he’d been cooking him breakfast, lunch and dinner.

Breakfast consisted of scrambled eggs, bacon and toast.  Lunch was usually hot dogs and tater tots while dinner was a frozen meal he heated up in the microwave.  Wendell was quick to tell me that he took the desert out of the meal because he knew chocolate was bad for dogs.  He ate that himself.

It warmed my heart to see a once scared, scarred, skinny dog from East Tampa, having dinner with his owner on a TV tray while they watched old westerns together.  I couldn’t have wished for anything greater for Charlie.

Things were great, except for one issue.  Charlie was a cat killer, and Wendell took care of a feral cat colony that had taken up refuge in his carport.  Charlie learned to be gentle and know his own strength when it came to Wendell, but curbing his prey drive towards the cats seemed futile.  They learned to avoid confrontation at all costs.

Charlie lived with Wendell for the last few years of Wendell’s life.  He never left his side, slept next to his bed on his slippers and if Wendell got up in the night to use the restroom, Charlie followed, waited and then walked him back to bed.  They ate every meal together, watched TV together and had long, deep conversations about life.  Well, Wendell did, and Charlie listened.  Charlie was there as Wendell took his last breath on December 30, 2010 and at that moment, Charlie jumped onto his bed (something Charlie had never done) and laid his head upon Wendell’s chest as he drifted into forever sleep.

Charlie took it hard along with the rest of us.  For weeks, he laid his big body down next to Wendell’s bed when it was time for sleep and at times refused to leave the empty room.  Sheila was faced with having to re-locate Charlie to her own home on ten acres with one very gloomy outlook.  Sheila had nine cats. 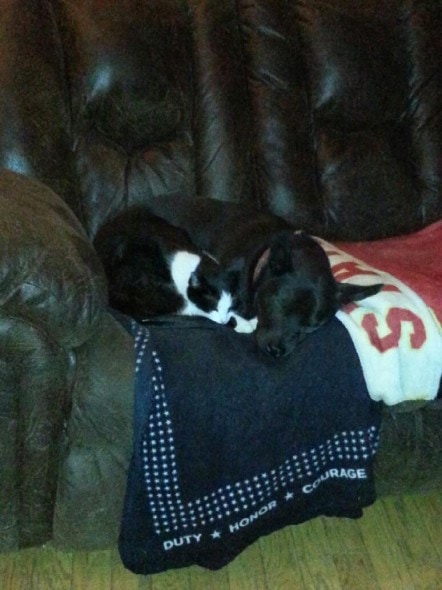 Sheila set out to change Charlie’s behavior and quickly.  Through positive reinforcement and shaping of wanted behavior, Sheila was able to teach Charlie to leave the cats alone.  Sheila also told Charlie that this is what Wendell would want and somehow, I think he understood, because in one short week, and after two long years of attacking cats, Charlie arrived at Sheila’s house and proceeded to take a nap with a female cat named Charlie.  Sheila’s jaw dropped, and she was speechless, but able to capture a photo as proof of an amazing transformation that could only be attributed to one thing:  the unconditional bond between human and canine.

Charlie did his job taking care of Wendell while he was here on earth with us.  Somehow, it seemed Charlie knew that he was taken from the hard, dirty streets of an East Tampa drug hole and given a once in a lifetime opportunity to connect with another sweet soul like himself. And now, Charlie lives his life on ten-acres, patiently waiting for the day he will see his best friend again at Rainbow Bridge.  I know Wendell is waiting. 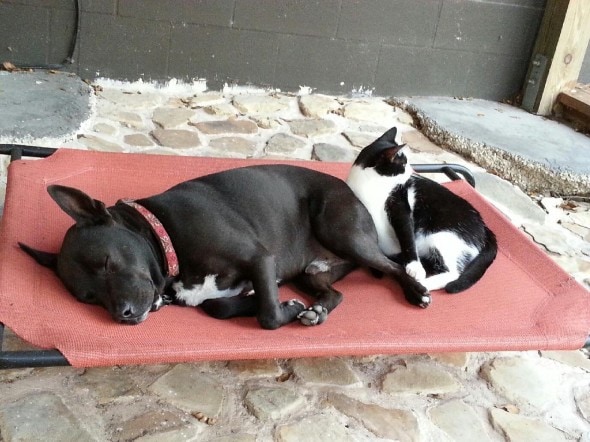