At the San Diego Zoo Safari Park, a six-week-old cheetah cub named Ruuxa was rejected by her mother, and had no siblings.  Even though this would be something considered very sad, it turns out Ruuxa has found a new friend in a seven-week-old Rhodesian ridgeback puppy named Raina.

It had worked before.  Pairing a cheetah cub with a domestic dog isn’t exactly something new.  So far, so good with these two.  They love to play together and neither is afraid of the other in any way.  They can even be seen sharing warmth and closeness when taking naps together, according to zoo officials.

A cheetah will usually give birth to a litter of three to five cubs.  For some reason, whenever they have a single cub they will often abandon it.  It is thought that this is done because the mother does not believe that just a single cub would be able to survive in the wild with her.

In their native Africa, cheetahs are listed as a “vulnerable species” because in recent years, populations have severely dwindled.  Although the cheetah is considered the fastest-running land mammal, they often end up as prey for lions and hyenas.  Also, hunting and poaching these beautiful animals has helped to decimate the number of cheetahs alive in the wild today in a very, very big way.

Ruuxa and Raina seem to have a very good handle on communication.  As the dog and cheetah got closer together when they first met, the dog’s body language seemed to tell the cheetah that there was nothing to fear in her surroundings.

“This helped in calming the cheetah,” zookeepers said. Everyone involved hopes that the pair will be lifelong friends. 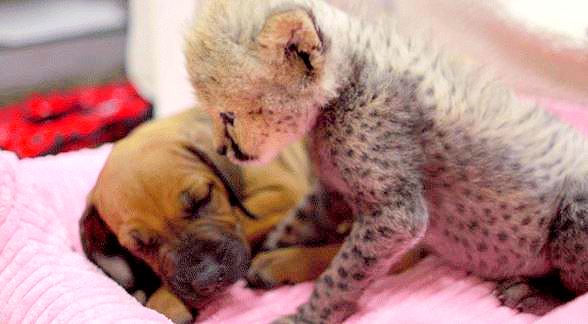