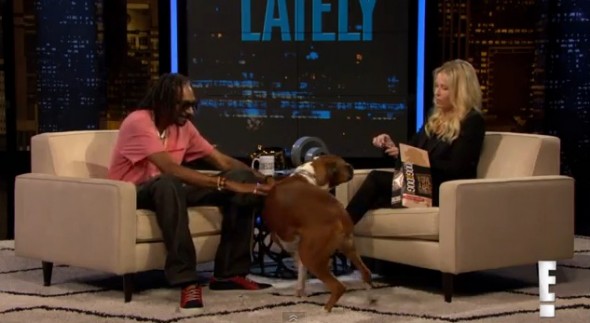 Add Chelsea Handler and Snoop Lion, formerly known as Snoop Dogg, to the list of celebrities you have a new-found love for because of their devotion to dogs. They have teamed up with a company to create a dog food that will help shelter dogs across the US.

The witty and irreverent late night talk show hostess and world-reknowned rapper introduced the line, called DOG for DOG™, on the interview segment of Chelsea Lately.

“We’re doing a project together, because we worked hard to come up with this really great dog food called DOG for DOG™, and then he changed his name to Lion and that doesn’t help the dog food,” Chelsea said. “But it’s called DOG for DOG™ and we spent a lot of money, a lot of people got involved to research this human food that we can give to dogs. So humans can eat it and dogs can eat it and every time you buy a bag of this dog food, they send another bag to an animal shelter and they save dogs’ lives. It’s a really good cause.”

Snoop continued: “It’s a great cause. Because, what a lot of people don’t understand is a lot of these shelters execute these dogs, not because they don’t have a place or someone that wants to adopt them, it’s more that they don’t have food to feed them.”

The concept was developed by Rocky Kanaka Keever after holding adoption events at his pet supply stores. But he began to feel discouraged after realizing that no matter how many dogs were adopted, more were euthanized every day. The only way to truly help was to start a movement. So the mission became clear: for every DOG for DOG™ item people buy, one is given to a shelter dog in need.

Partner Michael Buble says, “I am passionate about helping dogs in need and that is why I buy DOG for DOG™.”

Prices of the items are costly, but within range of other healthy and organic dog foods. It may be well worth the money to know that while many dogs do not have loving homes and families, at least they will at least have full bellies.

“There are two kinds of people I don’t trust,” Chelsea says. “People who collect sea shells and people who don’t help dogs in need.”