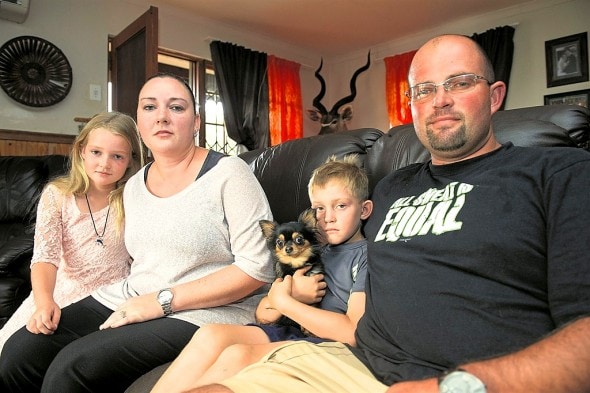 A little dog became one family’s hero when she woke them up during a robbery.  She also took a kick to the stomach so she could grab one of the gunmen by the leg.  Though one person was shot, the family made it to safety because of their brave little Molly.

All was quiet in the Rustenburg, South Africa home until Molly began barking ferociously around 1 am.  Zach Scheepers awoke to see a man standing in his bedroom doorway with a flashlight and 9mm gun pointed at him.  The man turned off the flashlight and kicked Molly.

“Thula wena (keep quiet),” he snapped at her.

The long-haired Chihuahua then bit at the man’s pant leg as he tried to kick her away.  He tried to free himself from her grasp, and shot at the couple.  Zach’s wife Brigette suffered a through-and-through shot in the thigh.

While Molly was trying to fend off the assassin, Zach had a brief moment to grab his own 9mm for his nightstand and fire back.  The man fled, but continued to shoot at them.  Four other intruders bombarded the house with a hail of gunfire.

Zach rushed to get his children, Zané and Johan, to safety.  He escorted them back to the master bedroom, where they called police and friends and family.  The property alarm sounded as the attackers launched themselves over the fence.

Zach was astounded that his little dog, who was known for “always running away,” had so bravely faced their assailants.

“I would not be here,” he told Netwerk24. “She’ll be getting big steaks tonight, if only the power would come on.”

The robbers got away with the family’s car keys, house keys, a laptop, a purse, and a cell phone.  Brigette was taken to the hospital for treatment and has since returned home.  The Scheepers are just glad that there were no lives lost.

“If it was not for that dog, I may possibly not be here today,” Zach said.