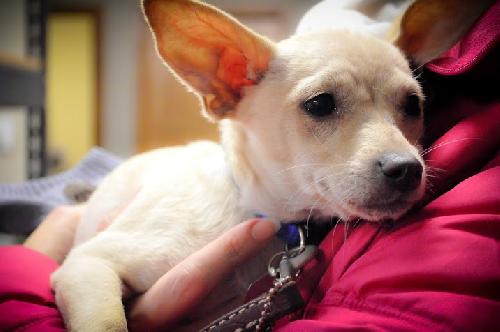 Little Waffles has been saved from the brink of death, not just once, but twice now! The Chihuahua mix was first rescued from a high-kill shelter in Missouri, where he had been scheduled for euthanasia as an unclaimed stray. He had been found wandering alone on the streets with no place to call his own. After being brought from the streets, he didn’t seem to thrive in the shelter environment-not surprising for a little dog weighing in at just 6 pounds!

Instead of being euthanized, though, he was rescued just in time and brought to Ruff Start Rescue, a no-kill animal rescue organization in Central Minnesota. Though the shelter had been a very scary place for him, once he was placed with a loving foster home, he really began to blossom. He came out of his shell and revealed his spunky, playful personality with a love for life.

Unfortunately, Little Waffles was not destined to have an easy time of it. Shortly after arriving, he developed a cough and after more than a week of medical intervention, his health deteriorated rather than improved. He stopped eating, stopped playing, and began to have seizures and symptoms of left side paralysis.

Ruff Start’s emergency vets were mystified as to the cause and the sudden onset of seizures. They suspected a neurological condition with a poor prognosis for recovery. However, these veterinarians are as passionate about saving lives as the rescue workers and they acted swiftly to intervene and stabilize him. No one was going to give up on Little Waffles!

Little Waffles has now been seizure-free for the past 7 days and Ruff Start Rescue is working diligently to get him into the University of Minnesota for additional testing and diagnostics. Once they determine the cause, everyone can work on addressing his medical needs and improving his quality of life. Little Waffles definitely has a great big love for life and is so happy to have been given a second chance.

Everyone hopes that he can live for years in the love of a home environment-something he never knew until now. He definitely has many people fighting for him and showering him with love. He has been everyone’s Christmas miracle and now they hope he will be the miracle for the start of 2014 too!

Ruff Start Rescue is a small, but mighty, non-profit 501(c)3 rescue organization in Central Minnesota dedicated to saving companion animals whose lives are at risk. They are committed to educating the community about the importance of animal rescue and responsible pet guardianship. They are a no-kill organization and have no facility to house animals in. Staffed entirely by dedicated volunteers who are passionate about saving lives, every dog or cat in the rescue is paired with a foster family who promises to integrate them into their household and respond with love and patience to address the sometimes unique needs of the rescued pet until they can be united with families who will love and care for them their whole lives. They believe that every animal should have a chance to live a quality life.