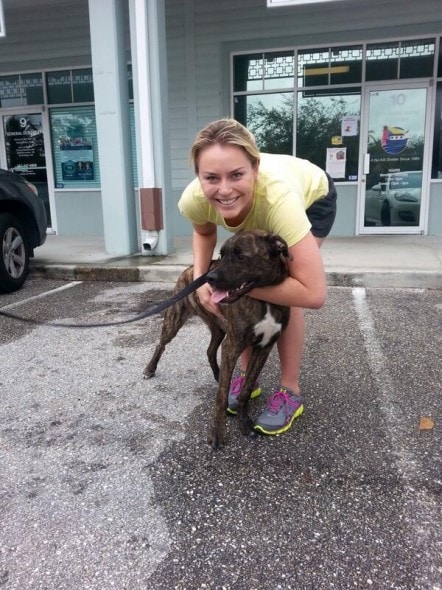 A day after professional skier Lindsey Vonn announced she would not be able to participate in this year’s Winter Olympics because of a knee injury she rescued a shelter dog with a similar injury.

Lindsay Vonn and her boyfriend Tiger Woods had started looking at dogs at Furry Friend Adoption and Clinic around Christmas. A day after having to withdraw from the Olympics Vonn showed up again solo to adopt Leo, a brindle boxer mix.

As a puppy Leo’s leg was broken when he was hit by a car. He was surrendered by his previous owner and has already had to undergo one surgery. Vonn did not let Leo’s medical issues deter her, and bonded with the dog because of it.

Vonn met with veterinarian Dr. Todd Vinoski at the clinic to go over Leo’s issues and discuss what could be done.

“She is going to take him to another orthopedic surgeon and see what can be done further for him,” said Vinoski.

Vonn was happy to bring Leo home and shared the news with her followers on social media. She posted the following on her Facebook page:

“This definitely brightened my day – I adopted this 9 month old cutie from an animal shelter. HE has a bad knee from being hit by a car when he was a puppy and no one wanted him…but I do! I encourage anyone looking for an animal to adopt from a shelter and save a life!”