Last week, 117 dogs – mostly Chihuahuas – were rescued from a home on Castille Drive in Altamonte Springs, Florida. The owner, 65-year-old Leo Durfey, called Seminole County Animal Services (SCAS) to report he could no longer take care of his pets.

Durfey is blind and his caretaker recently passed away leaving him and his dogs to fend for themselves.

When authorities arrived at the home, they found all animals living in filth. The home was covered in urine and feces, but fortunately for the animals, they all seemed in good health. 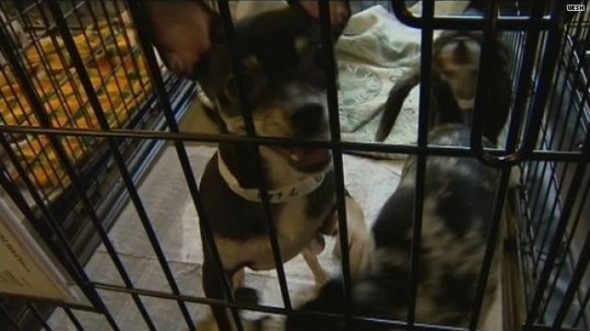 Authorities said Durfey housed so many animals in his house – ranging from one week old to 10 years of age – that he had to live in his garage.

What is strange in this case is that even though the home presented signs of animal hoarding, not one neighbor called animal services to report Dufrey.

“From a community standpoint, we had zero complaints about this residence, about the barking, about the smell,” said Woodard. “We had residents living on both sides of him and none of them ever called in to complain. Just approaching the home, just the smell alone when you approached, was enough that it should have set off some alarms.”

When the community learned about the more than 100 dogs found in the home, many people rushed over to SCAS to adopt. Over the weekend SCAS and the SPCA of Central Florida held a special adoption event and more than 40 lucky dogs found new loving forever homes. The remaining dogs are being cared for in foster homes. Some are pregnant and others are too young to be placed for adoption.

Animal hoarding situations usually end with many malnourished, sick, and neglected dogs, but in this case Dufrey did the best he could to offer his animals the best life possible. This case is an animal hoarding exception, not one of these dogs suffered physical or health ailments, they just needed the proper environment to enjoy the good life dogs deserved.