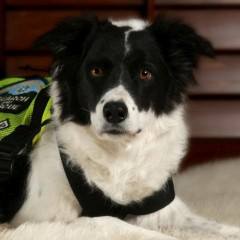 Blaze has been serving as a search and rescue dog for nine years.  On Saturday he retired from his long and successful career.

Blaze has served as an important part of the Santa Barbara County Search & Rescue team. He has gone on 81 search and rescue missions, including 29 out-of-county searches. He has trained and worked with handler Juanita Smith.

“I would like to say that I trained Blaze, but in reality, he trained me,” said Smith. “There were times on the trail that I would give a little back pressure on the lead and ask Blaze if he was sure; he would look back at me and whit his body language say, ‘Trust me, I got it,’…and he would be right.”

Blaze aided on some big searches and after 9 years of service is ready to retire. A new border collie puppy named Casper is training to step into his place. It will take Casper around two years before he is fully certified.

On Saturday other search dogs and their handlers, Search & Rescue team members, and Sheriff’s Department personnel gathered to pay tribute to Blaze. Now Blaze will enjoy time at home resting and playing with his toys.