Lentil and Robert both have cleft palates, and instantly bonded. They met at the University of Pennsylvania veterinary school for an event held with Children’s Hospital of Philadelphia.

The concept is to have children with “facial differences” meet dogs with snout differences. Lentil has had life-saving cleft palate surgery because he could not eat or drink properly. Georgia, a Gordon setter, and Buddy, a golden retriever, who have had sections of their jaws removed because of cancer, were also in attendance. 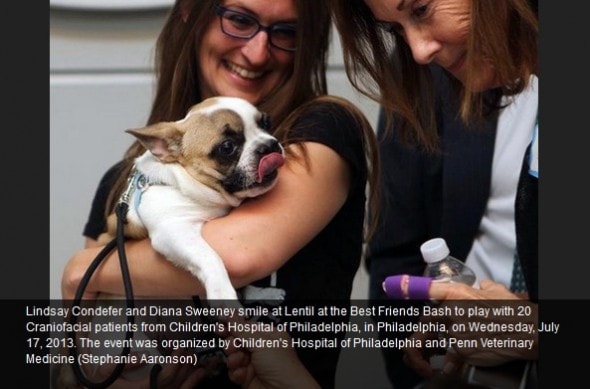 Lentil, named because he looked like a bean when he was born, was given up because of his condition. He was saved by a rescue group, and Chic Petique boutique owner Lindsay Condefer fostered him and fell in love.

She began a Facebook page for him, where others came to know and love Lentil. Mothers of children with cleft palates started calling after seeing posts of Lentil’s surgery process – their kids loved him!

Lentil traveled to Orlando earlier this year to make an appearance at a Children’s Craniofacial Association camp. Erik Larys and Kim Trzanowski drove from New Jersey so their son Trevor meet Lentil face-to-face. 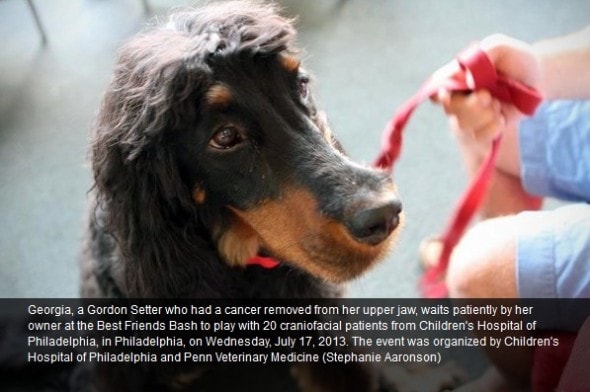 “It’s really about the awareness of appearance,” said Scott Bartlett, Children’s chief of plastic and reconstructive surgery. “The dog is an ideal vehicle. They have unconditional love. They don’t look at faces.”

Thankfully, Buddy’s humans did. Julie and Geoff MacKenzie’s son noticed a lump in their dog’s mouth. It was cancer. Thankfully, the family was able to afford surgery for their dog, who is now serving as an inspiration to others.

“The lesson of Buddy now is that while the experience may seem traumatic at first, those around you don’t love you any less,” Geoff said.

Georgia was only a year-and-a-half when her cancer was discovered.

Now eight years old, owner Lynnrae Fenimore, a pet photographer, calls her “a great survivor.” Part of her jaw may be gone, but “she’s still an amazingly beautiful animal. I just think she exudes beauty, in her own way.” 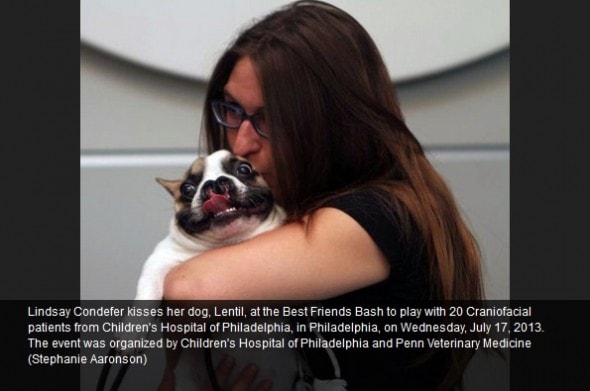 The event helped not only children and dogs bond through their differences, but gave doctors a chance to share their experiences and take away new information. While many aspects of surgeries are similar, there are opportunities to learn new techniques for both children and dogs.

Lindsay just loves seeing the adoring looks between her Lentil and the children. When asked what she thought he would say if he could talk, she responded, “I don’t know. He and the kids tell their own secrets.” 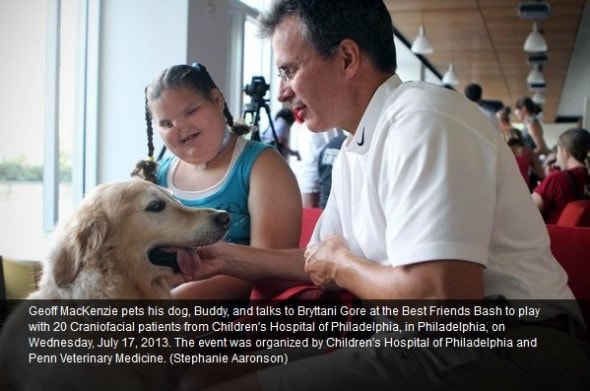