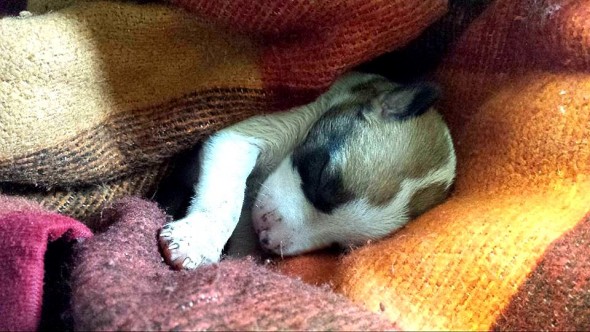 Poppy was out for a walk with her owner in Dublin when she ran over to a trash heap and refuse to come back.  She had found a tiny puppy, and had it not been for her, Autumn wouldn’t have survived.

“This is baby Autumn who was brought to us today after she had been thrown onto a rubbish pile and left for dead. We have no idea why this little pup was abandoned in the way she was but we know it is a miracle she is alive as the place she was left is an empty almost derelict site well away from the public where rubbish is dumped in a corner,” the Dublin SPCA said.

“Autumn is only seven to ten days old and would not have lasted probably even 24 hours if she had not been spotted by a very clever terrier called Poppy who when out for a walk with her owner ran over to the rubbish pile and refused to return when called. Poppy’s owner had to walk over to see what Poppy was sniffing when she discovered little Autumn just lying there in the rubbish. Autumn will now go to an experienced foster home and hopefully will grow up to be a happy healthy dog all thanks to Poppy and her vigilant owner.”