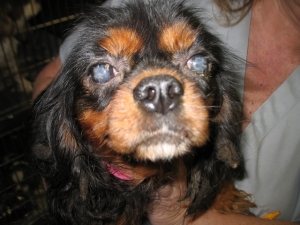 Around  1 a.m. on Tuesday police in Flower Mound, Texas received a call that a pack of dogs were running loose. Police spent hours rescuing fifty-one Maltese pups that had been dumped. Two nights later at around 3 a.m. just 30 miles north in Denton, Texas forty Cavalier King Charles Spaniels and one Cocker Spaniel were found in the same manner.

All the dogs a healthy, though they clearly had been living in filthy conditions, “They are relatively healthy, other than the condition of their coat, which is covered in dirt and feces,” said Flower Mound police Captain Richard Brooks. Some of the Cavalier King Charles Spaniels also had some eye problems.

Since in each instance the dogs were the same breed, authorities are suspecting a puppy mill or dog breeder is responsible. On September 1st, a new law took effect in Texas which requires breeders to obtain a license by undergoing inspection. “If their breeding operation is not within the guidelines, then they won’t be issued a license, wouldn’t have the ability to sell the dogs,” said Captain Brooks, “We believe the breeder knew the condition of the dogs would not have passed the inspection and dumped these dogs in an effort to get rid of them.” Detectives believe the two incidents are linked and intend to prosecute to the fullest extent of the law.

Flower Mound officials are encouraging anyone with information to call detectives. Anonymous tips can be phoned in at 972-874-3307. The Humane Society of North Texas,, who was called on to help with the spaniels, are offering a $500 reward for information leading to a conviction of whoever dumped the Spaniels. The Humane Society is holding the dogs as strays at its location at 1840 E. Lancaster Ave. in Fort Worth. With the sudden influx of nearly 50 dogs donations of food for dogs and cats, money, or Kuranda dog beds are being requested. The Maltese dogs were taken in by Flower Mound Animal Services and will likely be available for adoption next week.