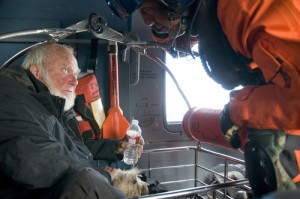 An MH-60 Jayhawk helicopter Coast Guard crew from San Diego rescued a 77-year-old man and his dog from a disabled sailboat that was adrift 120 miles west of Ensenada, Mexico. The 30-foot sailboat had lost power, and lacked food and water, the Coast Guard said.

The man and dog were hoisted from the boat and transported safely to San Diego following yesterday’s rescue, which took place after a ham radio operator relayed an emergency call from the boat’s owner. U.S. Coast Guard raw video footage was filmed by by Petty Officer 2nd Class Henry G. Dunphy.

While the video is not dog-specific, rarely is such compelling raw video released to the public. If you’ve never seen point-of-view footage of an ocean rescue from the sky, you’re in for a treat.