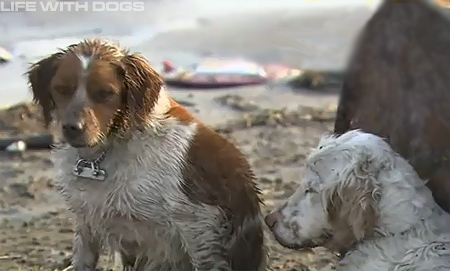 Last week’s ultimate loyalty viral video experience literally turned our world upside down. The scramble to answer thousands of inquiries while we rebuilt the site and moved to a new server was all consuming, and now that we’ve had a moment to catch our breath, it’s time to address your questions – and give you a chance to meet the people who bring you Life With Dogs.

While other dog sites spent the weekend uploading copies of the video to try and add to their traffic stats, we were frantically searching for an answer to the question that has everyone holding their breath. While it’s too early to make a definitive call either way, it is starting to look like there is a very good chance that we will never know what truly happened to the two best friends featured in this incredibly heart wrenching video.

Of course, as of last week all signs pointed to positive news. Major media outlets were reporting that Kenn Sakurai had possession of the dogs as late as Friday, and our initial inquiry prompted the following response from Kenn on March 17th: “They are still at the vet clinic. Let’s pray they can meet (find) the owner.”

When we were interviewed Friday, it was still believed that the dogs were safe, but pointed questions directed at Kenn Sakurai were going unanswered, raising suspicions about his fundraising activities on behalf of the dogs. We followed up with him for clarification on the 72 hour limit for animals in Japanese shelters and received the following:

“No no, they are saved by us which means there will be no… way to be killed after 72 hours. That 72 hours rule is for the stray dogs and cats which has no sign of owner and if they are brought into the government related Animal and Health Stations. 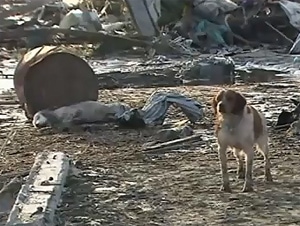 That’s why us the independent rescuers and shelter owners are for and we are depending on the donations only.

There are J-SPCA and those organizations but they won’t be any help. They used to be good. But after many years, it became the cozy nests for those retired government officials.

This time, the case is much harder. It will take time to find the owners and they might be swept away by the Tsunami and might be gone. Even we have to draw the line and find the new home for them.

Also talking about the above government related stations, they don’t care much for the old, injured and recovering from injury or sickness dogs. But we do care. That’s the sad part of Japan as far as the humane society is concerned.

But this disaster is something different by means of away beyond what we could thought of. Therefore we might unite and start up the new NPO for the purpose. Wish us luck. ”

Shortly thereafter the demands for picture proof of the dogs started pouring in – appearing on Kenn’s wall and in our inbox. One angry reader even chastised us, believing that we had claimed to have possession of the dogs and were holding out. The hunt was on, and the weekend found Kenn Sakurai’s Facebook wall littered with questions about the dogs and demands for photographic evidence of their existence. Some were answered, some deleted, but none offered what most of the world was in search of: definitive proof.

Our last message to Kenn Sakurai was met with a terse reply. He was obviously defensive and asked why people were demanding pictures of two dogs when thousands were missing and injured and needed immediate attention. It seemed a fair question, and rather than badger another human who was half a world away and stuck in the midst of unimaginable disasters, the decision was made to back off.

Why? Why let up when so many people want to know? That’s easy to answer: if Kenn is telling the truth (keep in mind that those who know him have mentioned that his character is unquestionable) and is struggling to rescue other animals in need in the midst of one of the world’s largest natural disasters, he doesn’t owe any of us a picture – no matter how badly the rest of us want it.

While that answer is likely to leave many unsatisfied, reality dictates that we wait, watch and hope. For the sake of your hearts and ours, let us hope that the wait is short, the news is good, and that all of us are in store for a great big, happy ending.

On a lighter note, we wrapped up last week in an interesting fashion. Can you tell how exhausted we were by the experience?

*Note: The following message was posted on Facebook by Kenn Sakurai at 10:30pm EST last evening: We wish to have the more images on those dogs but simply impossible for now. No cell phone reception and the vet is not willing to have any publicity and so we had to agree with him until the dog(s) could be released to the next facility which would be the shelter. Until the shelter facility is being made somewhere near there, the vet takes care of them.