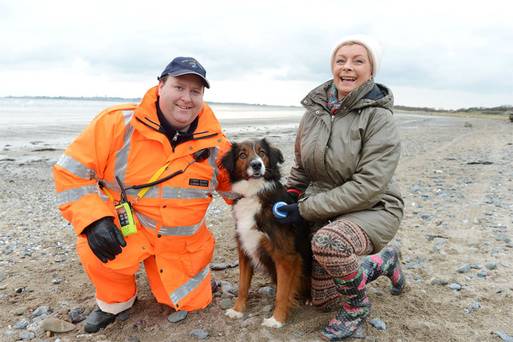 Every morning Colette Connolly goes running with her dogs Hector and Libby. Then one morning things went terribly wrong when Hector fell while catching his ball. The ball became lodged in his throat and Hector would’ve choked to death if Coast Guard volunteer Gary Creighton hadn’t come to the rescue.

Hector, a 3-year-old collie, was enjoying his morning run chasing his ball on the south beach at Rush, Ireland. “We were playing ball and it bounded high and as he jumped up to catch it he twisted and landed badly on his back legs,” said Connolly. “The ball went way down the back of his throat.” The ball, which is designed for dogs, doesn’t normally get stuck in an animal’s throat.

Connolly desperately tried to stay calm as she attempted to push the ball out of Hector’s throat. “I could feel it in his throat with my hand and I started trying to push it back up his throat,” she said. “He was getting short of breath and collapsed on the sand.” After about eight minutes trying to push the ball out Connolly was about to give up when she spotted a white jeep. “I ran at it like at it like a mad woman waving my arms and it stopped.”

Inside the jeep was Gary Creighton, a Coast Guard volunteer. Creighton is a fully trained cardiac first responder and immediately went into rescue mode. “I just thought okay, what would I do to relieve choking in a person,” said Creighton. “He was a pretty big dog so I started doing chest compressions.”

As Creighton pressed on Hector’s chest Connolly continued to try to push the ball up the dog’s throat. The efforts worked when the ball appeared at the top of Hector’s throat and Gary grabbed it and pulled it out. “His heart started to beat and he began breathing,” said Connolly. “I just threw my arms around Gary. He was like an angel coming from heaven to our rescue.”