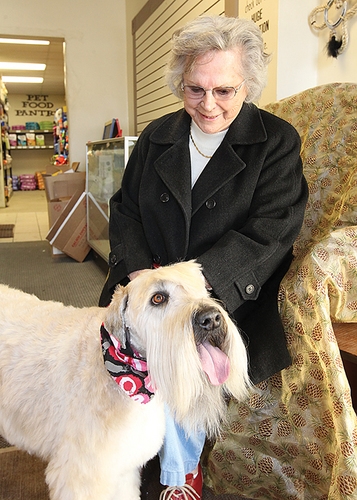 As Agnes Larson slept soundly a few weeks ago she had no idea the danger she was in. As a burglar holding a crowbar stood only 12 feet from her bed her dog Clancy came to her defense, scaring the burglar away and protecting Larson.

Clancy, a 7-year-old Wheaten Terrier, isn’t they type of dog you would picture to fight of burglars. “He’s a big push over, a baby,” said Larson. “He’s the kind that people would think could probably lick a burglar to death.” Larson’s children often found Clancy annoying because he was so spoiled and needed lots of attention. Now everyone is seeing Clancy in a new light after what he did a few weeks ago.

Larson had taken her medication and gone to sleep with Clancy lying at her feet. As they slept Clancy, who doesn’t see very well, sensed that something wasn’t right. “He started growling, and even though he never does that, I still didn’t think too much at first,” said Larson. “Then he stood up, started to bark and then took a big leap. It must have been eight feet before he even reached the group.” What Clancy knew and Larson didn’t  was that a burglar was standing only 12 feet away from their bed ready to use a crowbar on Larson if she got in his way.

The burglar was 20-year-old Cody Hawk. He and his accomplice, 18-year-old William Dunbar, were determined to get money from Larson. “They confessed to the police that when the dog started barking at them, they grabbed a small butcher knife from the kitchen and were going to kill the dog first and then use their weapon on Agnes if she didn’t shut up and stay in her room,” said Park Rapids Chief Terry Eilers. Clancy continued to bark and threaten the burglars, eventually scaring them enough to leave.

Larson was groggy and not completely aware of what was going on. She didn’t completely wake up until the next morning. When she found her kitchen floor wet she first thought Clancy had had an accident. “And poor Clancy, I blamed it on him and asked him, ‘Did you go on the floor?’” said Larson.  She didn’t realize it was from snow that had melted off the burglars’ boots. Then she spotted the crow bar and realized what had happened.  She quickly called police.

Footprints leading from the home led to a hardware store which had surveillance video of the two men, which helped police catch and charge them. It turns out the two men are connected with several other burglaries in the Park Rapids, Minnesota area. The two have been charged with first degree burglary and an unprecedented bail of $250,000. More charges are pending as other burglaries are investigated.

Larson has changed her locks and Clancy is now enjoying being pampered not only by Larson but many others. “Things could have turned really bad really fast,” said Eilers. “That dog really was a hero.”