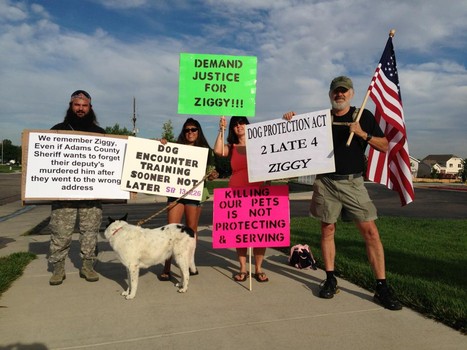 A meeting took place Wednesday for police officers and dog behaviorists to go over details and develop their new plans as part of the Dog Protection Act, which aims to eliminate the number of non-aggressive dogs shot by police. In the last five years, about 40 dogs in Colorado have been shot and killed by police – something citizens and dog lovers everywhere are eager to see stopped.

In January 2013, a blue heeler-border collie mix with no history of aggression was shot by an officer responding to a call at the wrong address. In November 2012, therapy mutt Chloe escaped through the garage door of a relative’s house, and despite being restrained by an animal control officer’s snare pole, was tasered and shot five times by a local law officer. In Auguest 2012, eight-year-old bulldgog mix Scar was gunned down and left to die in agony in his front yard, even though he never growled, charged or showed any other sign of aggression.

Officers will be educated and trained on how to deal with dogs. The legislation will require sheriff and police departments to offer three-hour online courses for how to recognize and understand dog behaviors, as well as use non-lethal methods to control them when necessary.

However, there are provisions which allows for officers to use their discretion – they must consider their own safety, as well as that of others. This leads many to wonder – how will anything change? No one can know for sure at the present, but at least officers will no longer be able to say, “Well, I fired because that’s what I was trained to do…” 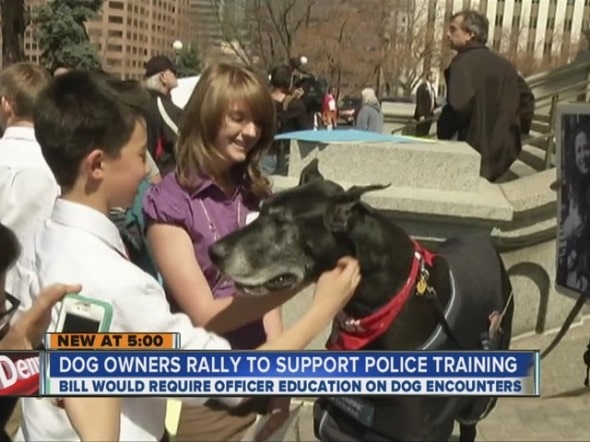 The law does not protect dogs if the call is for a violent crime, or a drug house. Sheriff’s deputies placed in courts or jails do not have to take the training, nor do code enforcement officers. But it seems that any officer with a firearm couldn’t do with a little more training if it means the life of one more family member is spared.

The County Sheriffs of Colorado support the new law – they even helped write it.

“We just wanted to be part of the process. We think our voices were heard,” said Chris Olson, the executive director of the group.

The Colorado Association of Chiefs of Police also helped pen the legislation, and a number of police departments have already their officers trained on dog behaviors.

“Unfortunately police officers do shoot dogs from time to time when they feel threatened by a vicious or aggressive dog,” said Darrel Stephens, executive director of the Major Cities Chiefs Association. “When they do occur, it is difficult for pet owners to see the circumstances in the same way an officer sees them – understandably they do not see their pet as being aggressive and potentially harmful to an officer. It is also difficult for the officers.”

Difficult as it may be for officers, it did not stop a sheriff’s deputy from killing service dog Kupa while on a call to check on the welfare of her owner. Or Ava, a German shepherd who had a rawhide in her mouth and had turned to go to her owner when she was shot.

“My best friend was shot in the back,” said Brittany Moore, Ava’s tearful owner. “The rawhide bone fell from Ava’s mouth, and she made the most awful sound that I have ever heard and immediately fell to the ground.”

After rallies and petitions, the Dog Protection Act was signed into law in April 2013 by Governor John Hickenlooper after it was passed by the Colorado House and Senate. All officers will be required to be trained by December 2014.