This photo book appears at first glance to be a simple story about three beautiful souls, a dog, a cat, and a man, living in the foothills of Grant’s Pass, Oregon. Stunning color photographs illustrate life in the wild – giving access to the humor and beauty of living in the back country.

However, a closer look reveals an intimate portrait of a man living on the edge of everything: civilization, community, and want.

After his return from the Iraq war, Stephen – like many other veterans – battled deep depression and anger; he struggled to find his place in society. A claim to the VA for Post Traumatic Stress was denied repeatedly, and Stephen slipped into a kind of despair. By 2012 he was homeless and living in Southern Oregon’s rugged outdoors, focusing all his energy on survival of the mind and spirit.

He turned to running in the high mountains as a way to satisfy his need for adrenaline-filled adventure, and he documented the harsh lifestyle with thousands of photos. Although every day is a challenge, Stephen says, “This lifestyle has become a therapy, and has given me immense hope for the future, and a newfound determination to overcome this situation.”

His friend, author and U.S. Marine veteran Lydia Davey, was moved by Stephen’s transparency, and by his determination to see good in the world around him despite his circumstances. Together, Lydia and Stephen created this book to add a voice to the conversation about the dignity and humanity of those who are homeless – particularly those who have served our nation in times of war. 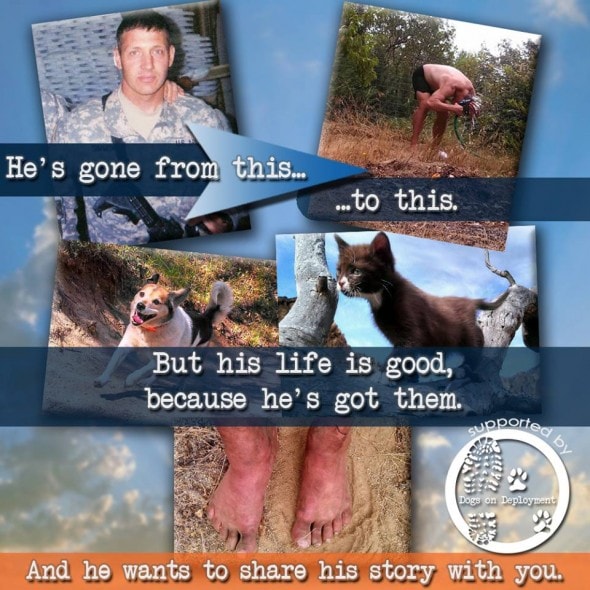 What the Money is For

The money being raised will help us produce an initial publishing run of 250 books. Printing one book at a time is cost-prohibitive, so your help will allow us to tap into a bulk publishing rate.

Each book includes 35 pages of color photographs, and measures 7×7″. The book will be available for purchase as an e-book, and in softcover and hardcover.

The money will also be used to buy Kickstarter rewards, and to pay miscellaneous Kickstarter fees.

If we exceed funding, we’d simply like to publish more books! We think anybody who loves nature, veterans, or animals will enjoy this story!

Our rewards are pretty awesome. We’ve got a ton of them available too!

Every backer who pledges more than $10 will get their name printed in “The Adventures of Puppi & Burma” as a supporter of this project!

About Stephen Simmons and Lydia Davey

Stephen and Lydia met during an Outward Bound dogsledding expedition in 2012. The trip was designed to help combat veterans reintegrate into civilian life, and both Stephen and Lydia learned key lessons about compassion during the expedition.

Nearly a year later, Lydia was writing a piece about homeless veterans, and she thought of Stephen. So she flew to Oregon and wrote about/photographed Stephen and his animals. She was impressed by his determination to see the best in a dark situation, and when she saw the beautiful photos he’d taken with his phone, the idea for this book was hatched.

Stephen joined the U.S. Army in 1986, and served several enlistments, including one tour to Iraq as an infantryman. He currently lives out of his jeep in the foothills of southern Oregon, but looks forward to having a real home again.

Lydia served as a U.S. Marine combat correspondent, and deployed to Afghanistan in 2006. She left the Corps after eight years with an honorable discharge and earned her BA in Communication Studies from Indiana University in 2013. She now owns a PR firm, Moriah Creatives, and lives in San Francisco.

Her work has been published in Stars & Stripes, Military.com, Marines.mil, Penthouse Magazine, and many other forums.

This project is fairly simple, but the main risk is potential slow delivery of your rewards. The rewards won’t be purchased until after our funding goals are met.

However, the book itself will be easy to produce, and shouldn’t be much of a challenge since a Marine is working on it.

To donate, please visit the Kickstarter page, The Adventures of Puppi and Burma, and check out their Facebook page for updates and more photos of their adventures.