Sometimes it’s easier to talk to dogs than to people, and that is especially true when it comes to Bronksey, a three year old lab/retriever mix who works as a victim comfort dog in the Staten Island District Attorney’s office.  Recently Bronksey was able to help a 5 year girl tell the terrible tale of her sexual assault, something she had been able to speak of with any human.

The girl was sexually assaulted last May by a relative, and was caught in the act by her 2 siblings who pulled the offender away and took her to safety.  This would have been enough to charge him with a minor sexual assault but to charge him with sodomy which carries a 25 year sentence they needed to hear from the little girl exactly what happened. 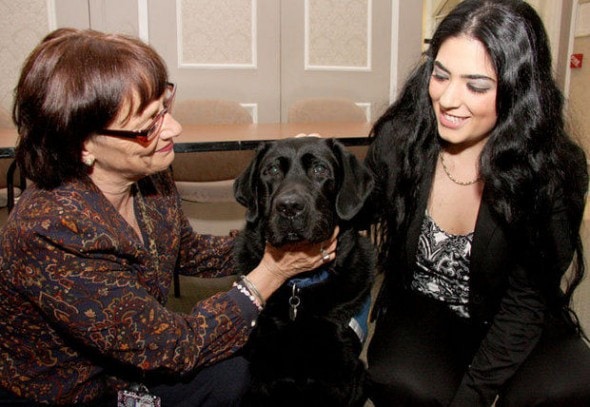 “So we brought Bronx in, we put a little jelly on the girl’s face so he’d lick her, and she’s hugging him and kissing him. She’s on the floor with him. And after he’s over his excitement of meeting you, he does what he’s doing right now. He is the perfect city employee,” Donovan said, gesturing toward the resting pooch.

“Actually, when he lays down, he flops down, he looks like a sea turtle laying on the beach, and he’s got the saddest face in the world.  “So the little girl looks at him and said to one of my lawyers, ‘You know, he looks very sad.’ And the lawyer said, ‘He is sad. He’s sad about what happened to you. Why don’t you tell him?’  And she did.  In front of five adults, she told Bronksey the story of what happened to her, which led directly to the assailants conviction.

“He is a comfort dog,” Donovan said. “He can’t smell out drugs. He can’t chase burglars down the street. He can’t even bark. What he does is he brings comfort to victims.”