This story was meant to be a fundraiser for a 10-month-old Belgian Malinois named Ranger who was poisoned when he ate sago palm leaves.  Sadly, he did not survive, but we would like to help prevent other unnecessary deaths by showing you some of the most common and deadly plants to cats and dogs.  Please share so other families know, too.

Many dogs eat grass and other plants to help sooth upset stomachs, or because their diets are lacking in particular nutrients, and others eat them because they just like to.  However, many innocuous looking plants are anything but, and dogs and cats need to be kept away from them.

The following plant descriptions and symptoms come from Melissa Breyer on Care2:

Aloe vera
Great for burns, toxic to cats and dogs. Who knew? If you keep an aloe plant on hand for burns, make sure to keep it out of reach for your pets.
• Symptoms: Vomiting, depression, diarrhea, anorexia, tremors, change in urine color.

Amaryllis
Pretty, common as a garden ornamental, and a very popular potted bulb for the holidays…and toxic to both cats and dogs. Be careful with the bulbs, they contain the most toxins.
• Symptoms: Vomiting, depression, diarrhea, abdominal pain, hypersalivation, anorexia, tremors.

Azalea/Rhodedendron
Not only toxic to cats and dogs, this popular garden staple is also dangerous for horses, goats and sheep, and ingestion of just a few leaves can cause serious problems.
• Symptoms:  Acute digestive upset, excessive drooling, loss of appetite, frequent bowel movements/diarrhea, colic, depression, weakness, loss of coordination, stupor, leg paralysis, weak heart rate and recumbency (lying down) for two or more days; at this point, improvement may be seen or the animal may become comatose and die.

Baby’s Breath
This sweet filler of many a floral arrangement seems innocent enough, but not so innocuous when it comes to your pet’s digestion.
• Symptoms: Vomiting, diarrhea.

Begonia
This popular garden and container plant is toxic to both dogs and cats. The tubers are the most toxic part.
• Symptoms: Oral irritation, intense burning and irritation of mouth, tongue and lips, excessive drooling, vomiting, difficulty swallowing.

Carnations
The carnation isn’t the most poisonous of the bunch, but it’s ubiquity in floral arrangements makes it one to keep your eye out for.
• Symptoms:  Mild gastrointestinal signs, mild dermatitis.

Castor Bean
Not in everyone’s garden or bouquet, but castor bean plant is a popular landscaping plant used in many parks and public spaces. Watch out for it on those dog walks.
• Symptoms:  abdominal pain, drooling, vomiting, diarrhea, excessive thirst, weakness and loss of appetite. Severe cases of poisoning can result in dehydration, muscle twitching, tremors, seizures, coma and death.

Chrysanthemum
The smell of chrysanthemum is enough to keep me away, but dogs and cats may still be drawn to it. It’s not likely to cause death, but it is a popular plant and can cause quite a bit of discomfort. In certain cases, depression and loss of coordination may also develop if enough of any part of the plant is consumed.
• Symptoms:  Vomiting, diarrhea, hypersalivation, dermatitis.

Cyclamen
These pretty flowers are popular in the garden and in pots, and they are toxic to both cats and dogs. The highest concentration of the toxic component is typically located in the root portion of the plant.
• Symptoms:  gastrointestinal irritation, including intense vomiting. Fatalities have also been reported in some cases.

Daffodil
Most people aren’t going to let their pet chow down on pretty daffodils, but who knows what may happen when you turn your back. These harbingers of spring are toxic to cats and dogs; the bulbs being the most toxic part.
• Symptoms:  Vomiting, salvation, diarrhea; large ingestions cause convulsions, low blood pressure, tremors and cardiac arrhythmias.

Gladiolus
Although gladioli are great in the garden, they are more popularly used in floral arrangements.  Since it is the corm (bulb) that is most toxic to dogs and cats it may not present much of a problem, but still…
• Symptoms:  Salivation, vomiting, drooling, lethargy, diarrhea.

Hosta
If you have shade in your yard, I’m guessing you have a host of hostas. Am I right? I’ve seen many hostas unbothered by dogs and cats, but the plant is toxic to both, so make sure your pet doesn’t have a taste for them.
• Symptoms:  Vomiting, diarrhea, depression.

Ivy (California Ivy, Branching Ivy, Glacier Ivy, Needlepoint Ivy, Sweetheart Ivy, English Ivy)
I really can’t see a dog or cat approaching a wall of ivy and begin munching away, but then again, some of the things I have heard about pets eating have really surprised me, so…be warned. Ivy foliage is more toxic than its berries.
• Symptoms:  Vomiting, abdominal pain, hypersalivation, diarrhea.

Lilies
So lovely, so fragrant, so dangerous to kitties! Members of the Lilium family are considered to be highly toxic to cats, even when very small portions are ingested. Many types of lily (Tiger, Asian, Japanese Show, Easter, Stargazer, Casa Blanca) can cause kidney failure in cats. Curiously, lilies are not toxic to dogs.
• Symptoms:  Kidney failure.

Milkweed
For the sake of the monarchs I really hope you will plant milkweed in your garden, but… dangit, it’s quite toxic to dogs and cats.
• Symptoms:  Vomiting, profound depression, weakness, anorexia, and diarrhea are common; may be followed by seizures, difficulty breathing, rapid, weak pulse, dilated pupils, kidney or liver failure, coma, respiratory paralysis and death.

Morning Glory
It somehow doesn’t surprise me that morning glory can cause hallucinations, and although cats on catnip are cute, cats and dogs experiencing rubber reality? Not so much.
• Symptoms:  Gastrointestinal upset, agitation, tremors, disorientation, ataxia, anorexia, hallucinations.

Oleander
Being a native of southern California, I’ve known forever that oleander is pretty and poisonous, but I never knew how severely it could affect cats, dogs, and even horses. All parts contain a highly toxic cardiac glycoside (much like digitoxin) and can cause a number of problems.
• Symptoms:  Colic, diarrhea (possibly bloody), sweating, incoordination, shallow/difficult breathing, muscle tremors, recumbency, and possibly death from cardiac failure.

Poinsettia
“Beware the poinsettia,” pet-owners have been told ad nauseam. But guess what, they are totally over-rated in toxicity! The ubiquitous holiday decoration may cause discomfort, but not the alarming panic that has been described.
• Symptoms:  Irritating to the mouth and stomach, sometimes causing mild vomiting.

Pothos
Not the most toxic plant on the list, but it’s such a popular houseplant that is should be noted that cats and dogs can both have adverse reactions to chewing or ingesting it.
• Symptoms:  Oral irritation, intense burning and irritation of mouth, tongue and lips, excessive drooling, vomiting, difficulty swallowing.

Sago Palm
If you live in a temperate region, chances are that you have sago palms around. They are a very popular landscaping plant, and also do double duty as a popular bonsai choice. They are apparently very tasty to animals, and unfortunately highly toxic.  All parts are poisonous, but especially the seeds.
• Symptoms:  Vomiting, melena, icterus, increased thirst, hemorrhagic gastroenteritis, bruising, coagulopathy, liver damage, liver failure, death.

Tomato Plant
Is there anything better than the smell of tomato plants on your hands after you’ve picked fresh tomatoes? Not so for your dog or cat. Although tomato plants probably won’t prove lethal for your pet, they can provide a good dose of discomfort.
• Symptoms:  Hypersalivation, no appetite, severe gastrointestinal upset, diarrhea, drowsiness, CNS depression, confusion, behavioral change, weakness, dilated pupils, slow heart rate.

Tulip/Narcissus
It’s the bulb of the tulip and narcissus plants that have the highest concentration of toxins. This means: if you have a dog that digs, be cautious. Or, if you are forcing bulbs indoors, make sure they they are out of reach.
• Symptoms:  Intense gastrointestinal irritation, drooling, loss of appetite, depression of the central nervous system, convulsions and cardiac abnormalities.

Yew
The bark and leaves of this very popular evergreen provided the basis for the cancer treatment drug, paclitaxel, but general ingestion of any part of the tree (except the flesh of the berry) can be very dangerous to animals. Horses have an especially low tolerance to yew.
• Symptoms:  Central nervous system effects such as trembling, incoordination, and difficulty breathing. It can also cause significant gastrointestinal irritation and cardiac failure, which can result in death.

Though not on this list, there are two other plants of note that have been known to cause fatalities in dogs.  One is water hemlock, which can be easily misidentified as Queen Anne’s Lace.

Another is cyanobacteria, also called blue-green algae.  Its appearance and odor can vary, so it’s best to keep dogs out of water that has any algae blooms just to be safe.  Even if they aren’t drinking the water, it can get on their coats, which they’ll likely lick later. 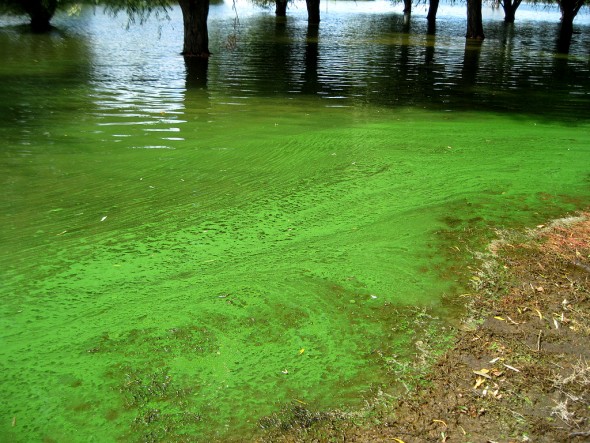 Though many plants are fairly safe to eat, it’s better to err on the side of caution and not let dogs or cats eat any plants at all unless you know for sure that they’re safe.

In loving memory of Ranger, a puppy who left this world far too soon. 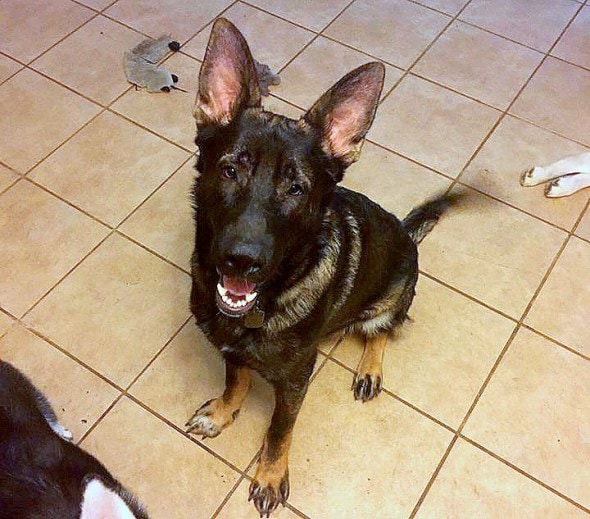