Kathy Isaksen of Tacoma, Washington is saying that she rescued a dog trapped in a hot car, and the local police department thanked her for her help by giving her a ticket for trespassing.  Isaksen said that she has dedicated her life to rescuing dogs and knows a dog in need when she sees one.  Believing that the dog she was seeing needed rescue, she just did what came naturally, she tried to help.

The whole thing took place a St. Joseph Medical Center, and Isaksen managed to get the incident on video.  In it you can hear her comment about how much the dog is panting, and how the poor creature just looked miserable.  According to what she says later in the video, 911 had been called four times to have someone come out and see to the dog, but things were apparently not happening fast enough.

A little while after that, hospital security comes out, but instead of trying to help the dog, they just dismiss the situation and try to assure Isaksen that everything is under control, and the dog is fine and not in any danger at all.

“They found the vehicle to have its windows down about half way.  All four windows down,” said Tim Ohaver.  Ohaver is the COO at St. Joseph Medical Center.  “The car was parked in some shade.  The dog had access to food and water.”

After security left the immediate area, Isaksen decided to take matters into her own hands.  She reached into the car, unlocked the door and let the dog out.  Then she set out to find the dog’s humans, which didn’t take too long.  In fact, once she delivered the dog to his humans, they seemed grateful for the help.

The hospital wasn’t very grateful for her help however, and they issued her a ticket and advised her that she was not to step foot onto hospital property for one year.  If she did, they would consider it trespassing and have her charged.  This would have made visiting her sister, who is in St. Joseph’s, impossible.  However, after talking things out, they hospital decided to drop the issue altogether, and she’s still allowed to visit her sister. 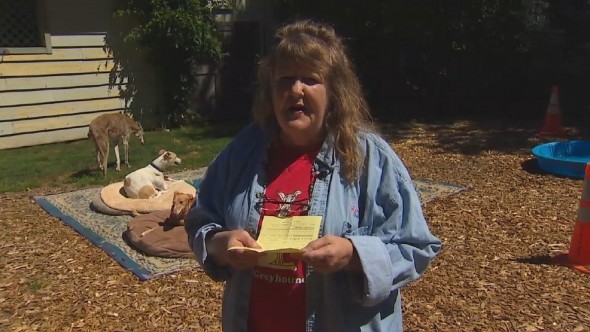