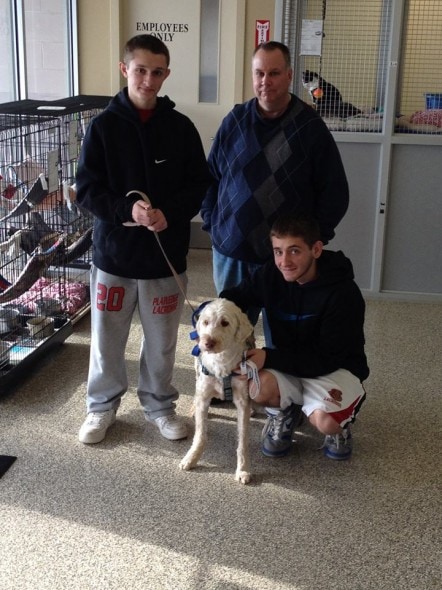 A Long Island family has been reunited with their Labradoodle Cody after he spent 13 days on the run. Hundreds in the community came together to help bring Cody safely home.

Michael Donovan and his mother were picking up Cody from a groomer on Valentine’s Day when Cody became spooked and wiggled out of his harness. Cody bolted into the nearby Massapequa Preserve.

“My heart was racing,” said 14-year-old Michael. “I walked through that whole preserve for about three hours by myself looking for him, but I didn’t see anything.”

The following day Michael’s older brother was searching the preserve when he spotted Cody. He called out to the dog, but as he walked towards him Cody sprinted away again.

The Donovan family quickly posted flyers all over their community, created a Facebook page and continued to search for Cody every day.

Soon the family wasn’t the only one searching for Cody. Soon more than a 100 volunteers were helping in the search efforts for Cody.

On Thursday morning the Donovan family finally got the call they had been hoping for. Laurie Scarpa from the Town of Oyster Bay Animal Shelter had Cody after he had been caught in one of the two traps the shelter staff had set up behind homes bordering the preserve. Bacon had been placed in the trap and successfully lured Cody into it.

Cody was about 15-pounds lighter and had a possible infection in one of his paws. He was tired, but happy to be going home.

“He’s overwhelmed by his experience, but I’m sure when he sees his mommy, my wife Mary, he’s going to go nuts,” said Kerry Donovan. “It’s going to be a very happy night.”