On March 11, 2014, Beatrice, a five-year-old, small, mixed breed dog, was stolen from her home in Milwaukee, and 11 days later she was found near Potawatomi Bingo Casino with burns to 90 percent of her body.

She was rushed to Milwaukee Emergency Center for Animals and that’s were she met her guardian angel, Debra Lopez, with Animal Fairy Charities. 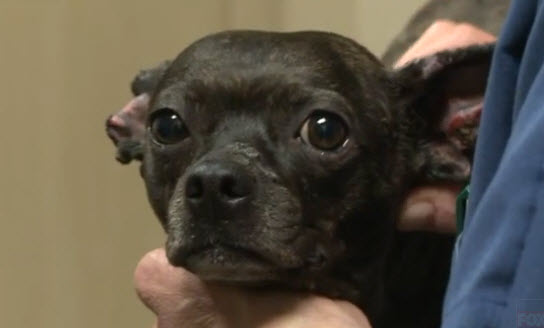 Beatrice has since been reunited with her owner and is undergoing treatment for the abuse she endured. Meanwhile, Lopez and the dog owner are doing what they can to find the person(s) who abused the small sweet dog.

“I thought we could help by putting out a reward for the perpetrators that did this,” Lopez told Fox 6.

As soon as the community learned about Beatrice’s story, donations started to pour in from all over the country. No one wants the animal abuser to go free and continue hurting animals and possibly people too.

“People just started calling and said ‘how do we help Beatrice?'” Lopez said.

On April 9, 2014, police caught a break and arrested a 21-year-old man in connection to Beatrice’s theft. So far, the man has not been charged with the abuse but the investigation is ongoing and police hope to close the case pretty soon.

As for Beatrice, she has a long road to recovery, but thanks to her owner, Lopez, and the hundreds of animal lovers that have rallied around her, the little dog is expected to recover and put this ordeal behind her.

If you would like to help Beatrice, you can do so at https://www.animalfairycharities.org/Help_Beatrice.php.