When Bear, a griffin/German spitz cross puppy, got lost two weeks ago, his owner, 9-year old Noel Wogan from Whangarei, New Zealand, was devastated. The puppy had been a gift from his mother, Donelle, who died this past May from a rare illness. Luckily, Wogan’s family and community came together to find the missing dog and reunite him with his young owner. 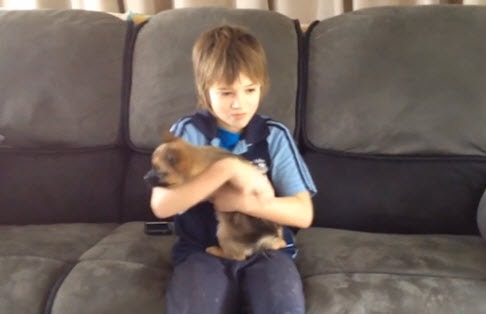 According to the Whangarei Leader, Bear had been handpicked and named by Wogan’s mother. Sadly, she passed away an the dog was the last gift Donelle gave her son. The canine’s disappearance saddened the boy even more, since he is still mourning the loss of his mother.

Bear got lost accidentally when a family member came over to the house and left the door open, but since the accident, family members searched for the pet. Neighbors and strangers joined in and even started donating money for a new puppy in case Bear was never found.

However, there was no need to use the funds towards a different puppy. An anonymous call pinpointed Bear’s whereabouts.  It appears the dog had been found by a neighbor oblivious of how much this dog meant to Wogan, but when the boy’s family knocked on the neighbor’s door, asking for the pet, the finder was more than willing to return the dog to his rightful owner.

Today, Wogan and Bear are back together and happiness has been restored to this boy’s heart. The 9-year-old said he is looking forward to cuddling with his furry best friend again.