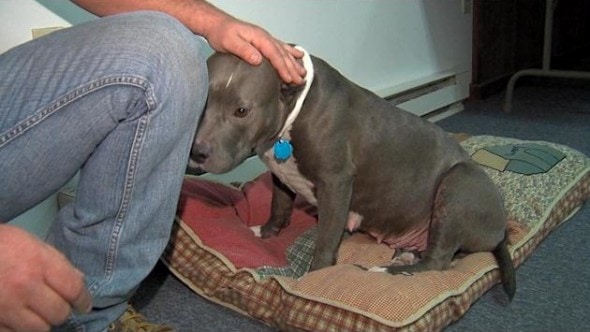 Two weeks ago Jason O’Donnell was at his construction job when he and a few of his coworkers saw a dog in danger. O’Donnell rushed to help the dog and is now in the process of formally adopting the dog whose life he saved.

O’Donnell, a crane operator, was working on a bridge that goes over the Swarta Creek in Middletown, Pennsylvania when he and some other guys on his crew noticed a dog in the water. O’Donnell left his work and rushed down to the water to help.

“There she was, lying half in the water. I took off my jacket and wrapped my jacket up around her,” said O’Donnell.

The dog was shivering and she was unable to help herself because her legs had been bound together. O’Donnell rushed the dog to the vet and called police to report the incident.

Once at the vet it was discovered the dog, who has been named Lady, had a dislocated hip an injury that she had sustained before being tied up. She will be receiving surgery on her hip this week.

“Why would you ever, ever want to do something like that? It doesn’t make any sense to me at all,” said O’Donnell.

Since the incident O’Donnell has been caring for Lady and he is in the process of formally adopting the dog and giving her the loving home she deserves.

Police meanwhile have been investigating the incident. Using Lady’s microchip they have identified her owner as Lamont Harris. On Friday, they officially filed charges of animal cruelty against Harris. They have so far been unable to locate Harris though. Anyone with information about Harris’ whereabouts should call Detective Ryan Gartland at 717-939-0463.

0 thoughts on “Construction Worker Saves Dog Abandoned in a Creek”