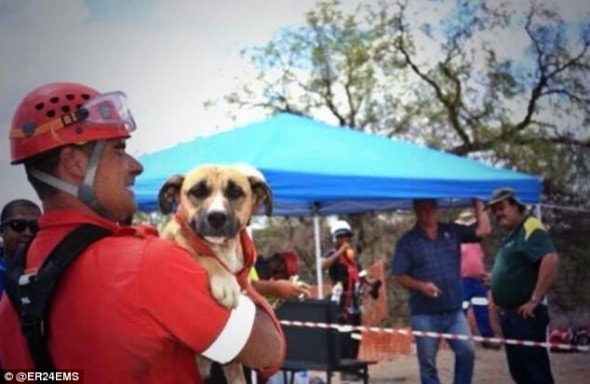 A South African dog is alive today after surviving for eight days in the world’s largest man-made hole. Strangers helped keep the dog alive for days by throwing the dog food until emergency workers finally were able to rescue her on Saturday.

Big Hole is a disused diamond mine in Kimberly, South Africa. The dog miraculously survived a 700 foot drop down into the man-made hole. Tourists spotted the trapped dog swimming back and forth across the water at the bottom of the mine and quickly alerted authorities.

Rescuers attempted to save the dog, which had been nicknamed Underdog, but the pit was very unstable and their ropes were not long enough. Thankfully, Underdog found a ledge to rest on and people threw food down to keep the dog alive.

Finally, on Saturday after the dog had been trapped for eight days rescuers were able to successfully save her from Big Hole. The private medical company ER24 sent a team of seven workers to help rescue the dog. After five hours  of work they successfully brought Underdog safely out of Big Hole.

When the workers initially reached Underdog, the scared dog jumped back into the water. With some coaxing the rescuers were able to put Underdog in a harness and hoist her out of Big Hole.

Underdog was checked out by a veterinarian once safely at the top of the mine and found to be doing well. Already hundreds of applications have flooded in from people wanting to adopt her. The staff at the shelter will carefully look through applications to find Underdog the right home.