This is an absolutely horrendous story.  I have no pleasure in sharing this news, and I don’t want to see it any more than you do.  But this is egregious, and it needs to stop.  He won’t even be charged for it, because his superior officer says that he was acting within his duty by shooting a dog in a fenced yard.  That’s why we need to make this heartless murderer – Wynnewood Police Department’s Josh Franklin – known for his heinous crime.

Eli Malone’s birthday will probably always be a painful reminder of what has probably been the worst day in his very young life.

“We had just brought the kids in to give them cake and ice cream,” Vickie Malone told the Daily News. “We weren’t even in the house five minutes and then ‘bang!’” 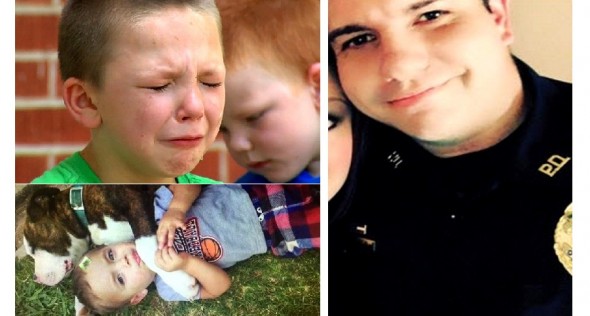 Everyone hurried to the window to see the three-year-old American bulldog-pit bull mix lying on the ground.  The adults rushed outside to find him “kicking and gasping for air” on one side of the fence as Franklin stood on the other.

“He walks slowly out to his car gets an AR-15 and points it at the dog and pulls the trigger,” Rio said.  “He fires another round and it ended my dog’s life. He lowered his head and drove off.”

The “blank-faced” cop could hear “every one of these kids screaming and crying” as he shot Opie again.

Franklin said that Opie apparently tried to attack him through the fence.  But the Malones don’t buy his story. 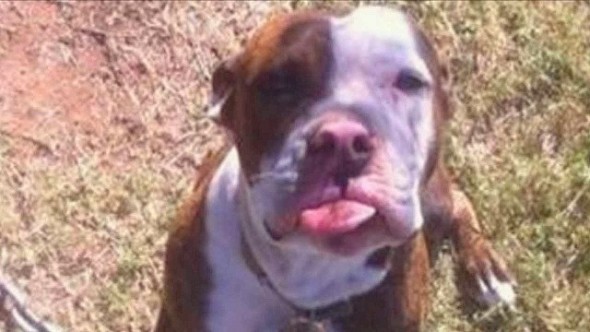 “The dog cannot jump the fence,” Vickie said.  “The gates to our yard are tied with wire and shoe string. The dog could maybe have gotten his head through the fence but he wouldn’t have been able to open it.”

The reason Franklin was there was because he allegedly had a warrant for a man whose last known address was this one.  But the case was from 10 years ago.  The Malones have lived at the address for a year, and Franklin knew that.

“Officer Franklin had been to the house twice before,” Rio said.  “Opie was chained on the front porch. They knew Opie was here, too.”

“He said that he was looking for Shon McNiel,” Vickie commented. “I said ‘There’s no one here named Shon McNiel. Who the hell is Shon McNiel?’” 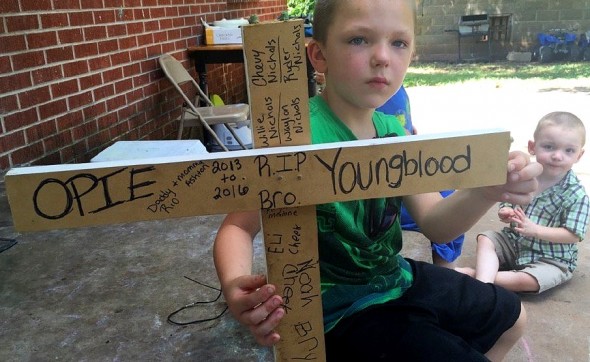 Police Chief Ken Moore fully stands by his officer.  He claimed Opie attacked Franklin as he was coming around the corner of the house.  However, this contradicts what Franklin originally stated, which was that the dog attacked him through the fence and he had to kick him off.  Opie was shot and died near the gate.

“We have a right to defend ourselves so I stand by my officer in the decision that he made.”

Rio’s son Vrylend is devastated by the murder of Opie.

“I came outside last night and he’s on the trampoline,” Rio explained.  “He said ‘I’m singing to Opie’s heart. I miss him.’”

People are rightfully enraged about Franklin’s unnecessary shooting of Opie, and have started a fake Wynnewood Police Department Facebook page to castigate them. 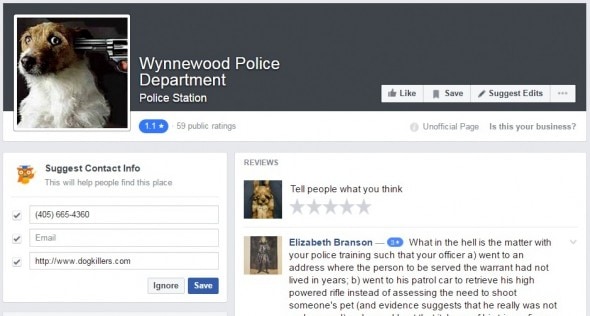