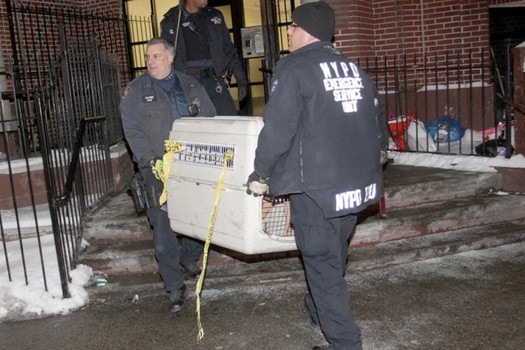 It seems like an impossibility these days to do a Google search or catch a news report from saying yet again, force was attempted on a dog by police officers resulting in another dog death.  Yet thankfully, after much public outcry, many officers are teaching and being taught restraint first when dealing with someone’s dogs.  However, it’s far too often still not the case.

What could have ended in disaster for a dog resulted in some unintended consequences for the police.  A dog that was “mixed” with a “pit bull” survived a near fatal encounter with NYPD, and a sergeant was sent to the hospital for emergency medical assistance.

For New York City Police Officer Philip Longo, one could say that his day started out with a bang!  Especially after accidentally shooting his Sergeant, Jun Mei Zhang.

According to official reports he was, “attempting to halt a charging dog that was mixed with some kind of pit bull when he drew and discharged his weapon once “during a call in a Brooklyn apartment block.

Longo said his hollow point bullet grazed the dog, ricocheted off the wall, and struck one of his superior officer’s toes.

It was discovered after the fact that “the dog was in no way involved with anyone included in the incident,” and was “accidentally let out of a different apartment that was on the same floor.”

After everything was said and done, and having read the full report by police officials, one person at a news source had just one question:  they wanted to know how, if NYPD is issued hollow point bullets, can the reports say that the bullet “grazed” the dog, then “ricochet” off a hallway wall in the manner described by the officer?  Those type of bullets simply cannot do that, because they fragment into tiny pieces upon impact, according to accepted general ballistics.

Longo reportedly only had to fire one shot to stop the dog in its tracks.  Unfortunately, it had to hit his sergeant in the, “tip of his toe.”  Sgt. Zhang was listed as in stable condition by Kings County Hospital.