When a sliding wall of snow overtook a Montana family during a Saturday ski trip, it was assumed that the family pet perished in the avalanche – until he was found four days later, exhausted and laying on the doorstep of the family’s hotel room.

The tired, hungry dog was first spotted by Alpine Motel owner Robert Weinstein, who was shocked to find ‘Ole’ waiting patiently for his master to return.

“I just saw it outside sitting by the room, which is pretty amazing,” he said. Weinstein fed the weary canine before making a few phone calls to confirm its identity. 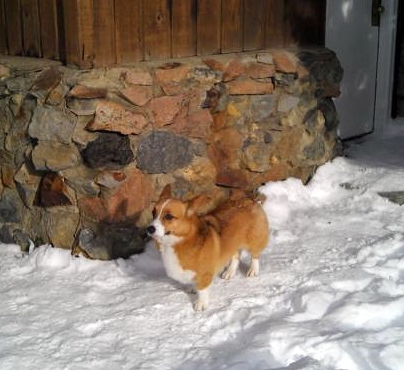 Ole was with his family when the avalanche occurred near Hayden Creek, just southeast of Billings. His master, Dave Gaillard, 44, of Bozeman, died when he became trapped under 12 to 14 feet of tightly packed snow. When he was not found afterward, his family assumed that Ole had been buried alive, and suffocated.

If he was buried, the resilient little dog would have had into dig his way out from under the crushing snowpack before traversing four miles of rough terrain in freezing temperatures in order to make his way back to the Alpine Motel.

“The family is super excited,” said Mark Staples, of the Gallatin National Forest Avalanche Center, which investigated the incident. “It’s one bright spot for them.”

Cooke City businessman Bill Whittle volunteered to drive Ole back to his family on Wednesday, and said he was in good spirits despite his ordeal.

“We needed this. It kind of cheered everyone up,” he said. “It’s a miracle.”

Update: (1-7-12) A skier trekked into the Hayden Creek drainage Thursday to retrieve video proof that Ole had indeed been buried alive, and what he found was irrefutable evidence of a remarkable tale of survival and determination. Ben Zavora documents his findings in the following clip.