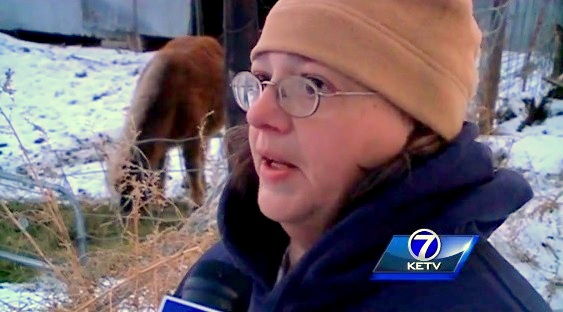 A Nebraska couple has been banned for owning animals for 20 years, and was facing 20 years in prison for abuse allegations.  The bodies of 30 animals were found on their farm, but Lori Peterson says they died because of a parvo outbreak from a dog she rescued, and that she couldn’t give them a proper burial while the ground was so frozen.

Dodge County residents Roland and Lori Peterson pleaded no contest to multiple charges of animal abuse and were sentenced to two years of probation and are not allowed to own any animals for the next twenty.  Had they not accepted the plea bargain, they would have faced 20 years in prison and a $10,000 fine.

“If they know me, they know this is bull, this is bologna.  I’m 53 years old.  I used to block semis to save ducks,” Roland said.

In August 2013 the sheriff’s department found the bodies of dead dogs, cats, goats, and horses on the couple’s property.  Lori said it was from a parvo outbreak, and that they did everything they could to save them.

Lori says last winter she rescued a Chihuahua and quickly found out it had parvovirus.

“It died within 24 hours.  We did IV therapies and antibiotics.  I still lost 16 of my babies… It was this time of year,” she said in December to the news crew she invited to her home.  “I couldn’t bury them because the ground was too hard.  So I put them in a bag and put them in the freezer.  I didn’t want to put them in the trash because they weren’t garbage.”

In December 2013, deputies seized horses, ponies, pigs, and goats from the Petersons.  They also found two dead goats and another that had to be euthanized.

“Unfortunately, they’re not able to care for them, and it was our determination in the sheriff’s office and the county attorney’s office that these animals be removed as soon as possible to get the care they need,” said Craig Harbaugh, Dodge County Investigator.

Officers said that although the animals weren’t in the best shape, they appeared to be cared for.

“Some of them, weight-wise, at least the animals we’re taking, appear to be okay, but theyre were definitely some concerns that, you know, some animals were definitely in need,” said Nebraska Humane Society Field Director Kristie Biodrowski.

All of the animals seized have since been rehomed.

3 thoughts on “Couple Given 20-Year Animal Ban, But Is It Fair?”