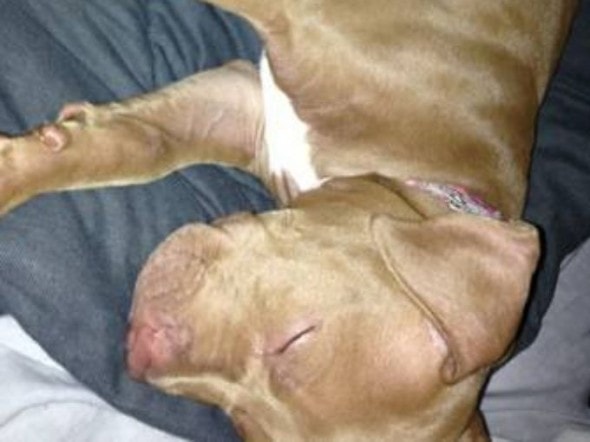 Taryn Ford and Jonas Speight of Kennesaw, Georgia are very upset about their 13-week-old pit bull puppy being stolen right from under their noses.  They bought Heather from an ad on Craigslist and she instantly fit in as a member of their family and was a constant companion for Ford’s 8-year-old daughter.  Now, they just want their family member back, unharmed, and everyone they know is getting involved in the search.

According to the couple, they got a knock on their door of the room they are staying in at the Sun Suites Extended Stay Hotel.  It was two teenage girls.  They had a puppy in their arms, and had asked if they could bring Heather out to play as well, but Speight declined.

Not long after that, he took Heather out to the grassy spot near the end of the property of the hotel.  He noticed the two young girls, now with two young boys as well, but no puppy in sight where there once was one.

“They approached Heather and asked if they could pet her and asked a lot of questions like was she a pure bred and how old was she,” he said.

Right at this point, one of the boys unlocked Heather’s collar, and took off running.

“One boy unhooked the collar and as I bent down to put the collar back on, he picked the dog up and said run.  Everyone ran and I was chasing them through the parking lot,” said Speight.  “They all jumped into a waiting car and took off.”

Cobb County Police are investigating the matter, and are asking anyone with information to step forward with any information that they may have.  It is believed that good snapshots of the suspects were taken by security cameras near the room the family is renting, and the search is on for Heather.  More information is available on the Facebook page that hopes to help bring her home.  Click here for more.