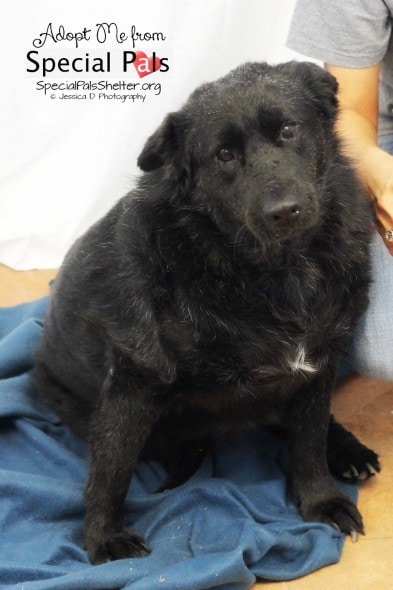 Dorothy was brought to Special Pals during the Christmas season of 2009. She was still a puppy, at only 6 months old, but had already been through what many dogs are lucky enough to never experience.

She was found during a police raid of a ‘crack house.” The conditions she was found in were deplorable! It appeared that she had been kept in a room, never given the chance to go outside. She had severe mange covering her entire body, large patches of hair were missing and some parts of her were so badly scabbed over she resembled a little dinosaur.

Special Pals veterinarians and staff immediately tried treatment after treatment, but to no avail. Her immune system was compromised and the slightest stress would trigger another severe skin outbreak. It took over a year and a half to combat and conquer every issue she had, and her recovery is almost beyond miraculous.

Despite all that she has been through, Dorothy’s personality remains sweet, playful and hopeful. She has an indoor room at Special Pals that she shares with a cat named Toto and is doing better than she ever has before.

She has been completely cleared by the veterinarian and, after watching hundreds of other dogs and cats find homes over the past few years, she is waiting for someone to give her a good home too. She loves to play with her stuffed squeaky toys or just lounge in the A.C. on a fluffy dog bed. She enjoys going out for walks and does well with most other dogs around her size. If you or someone you know is interested in Dorothy, come by Special Pals to meet her. She would love to get to know you.

Special Pals has served the greater Houston area for over 30 years. The shelter sits on 3.5 acres and can accommodate up to 150 dogs and cats. They are located in West Houston but are not positioned in a high traffic area. Originally, Special Pals only offered adoption to the community, but in the last 6 years they have increased their scope of services. They depend heavily on marketing and PR efforts to spread the word about our services to the community. Without the support of donors and major gifts, they would not be able to continue their mission as a no-kill animal shelter. They strive to offer an alternative to euthanasia by providing treatment to animals with health conditions, in addition to providing care for healthy animals. This increases the financial strain, but helps provide a better quality of life to animals that may have been euthanized at other shelters. Furthermore, they provide essential services, including low cost vaccines, spay and neuter, boarding, and adoption.