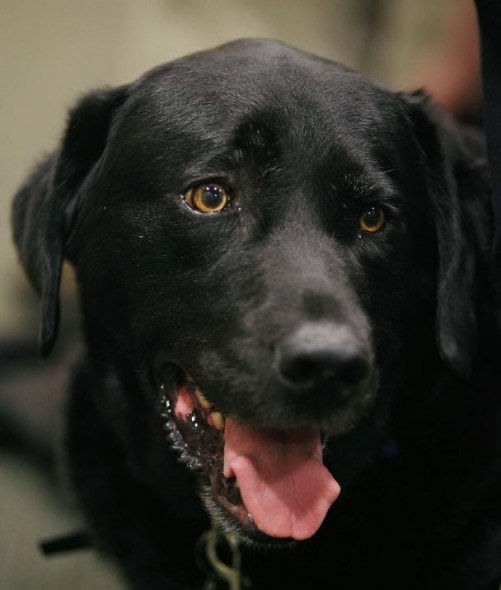 After seven years Stilson, the first courtroom dog in Snohomish County, Washington is retiring. Over the years the black Labrador has comforted hundreds of children who were victims of abuse as they testified.

Potter agreed to undergo the training and be responsible for a dog, including paying for his food and medical bills. After training and socialization Stilson was matched up with Potter and he has been helping victims ever since. Potter works as the lead victim-witness advocate and Stilson was by her side helping victims to open up and feel comfortable as they told their stories.

“I love that dog. I love what he has done for kids and victims,” said Snohomish County deputy prosecutor Lisa Paul. “He helps them face what they have to face in the criminal justice system”

Paul prosecuted a case last fall where an 11-year-old girl who testified how she was repeatedly whipped with electrical cords, burned with lit cigarettes and starved for days. As she testified Stilson lay at her feet. For two hours the gentle Labrador didn’t move or make a sound, he just lay there bringing comfort to the girl.

After seven years Stilson retired earlier this month. His handler, Heidi Potter, is leaving the prosecutor’s office for other opportunities. The two are moving to California where Stilson’s plans are to become a beach bum and getting the rest he deserves. Potter recalls how Stilson would often come home exhausted; he’d eat dinner and then go right to bed. He spent all day absorbing the grief and hurt of the victims he comforted.

Stilson’s presence will be greatly missed, but the prosecutor’s office is already planning to get another dog as soon as it can be arranged.