Thank You to our reader, Heidi Johnson, for sharing!

Though we focus on dogs, we love coyotes and other wildlife too! This story is amazing and unbelievable – this coyote had a guardian angel looking over him!

The coyote was hit by a car at 75mph and became embedded in the fender, where he rode for 600 miles and managed to survive.

Daniel and Tevyn East, a brother and sister duo, were driving at night along Interstate 80 near the Nevada-Utah border. It was here they noticed a pack of coyotes hanging along the roadside. One of the coyotes ran out in front of the vehicle, creating the sound of a fatal impact. Assuming they had killed something, they drove on. Of course, they had no idea it was alive and along for the ride!

“We knew it was bad,” Daniel explained. “We thought the story was over.”

Eight hours, two fuel stops and 600 miles later, the pair found the coyote stuck in their fender – very much alive!

“[Daniel] saw fur and the body inside the grilled,” Tevyn said. “I was trying to keep some distance. Assumption was it was part of the coyote – didn’t register it was the whole animal.”

Daniel East retrieved a broom to pry what he thought were the animals remains.

“It flinched,” Tevyn said. “It was a huge surprise – he freaked out!”

When animal control arrived, the wildlife protection officials put a loop around the coyote’s neck to prevent any further injury. The front of the car had to be taken apart for the coyote to wriggle free.

They named him “Tricky”, the toughest coyote ever. He managed to survive the ordeal with just a few scrapes to his paw. 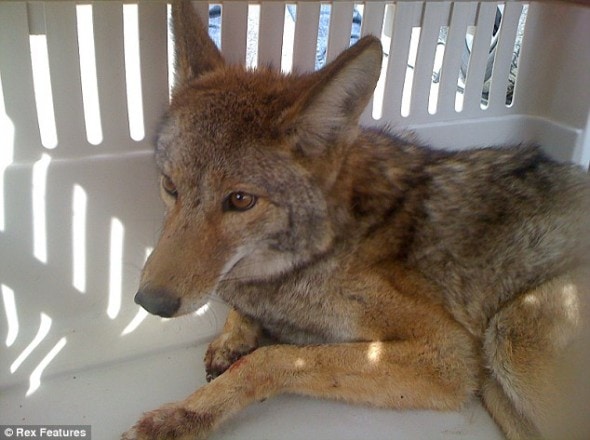