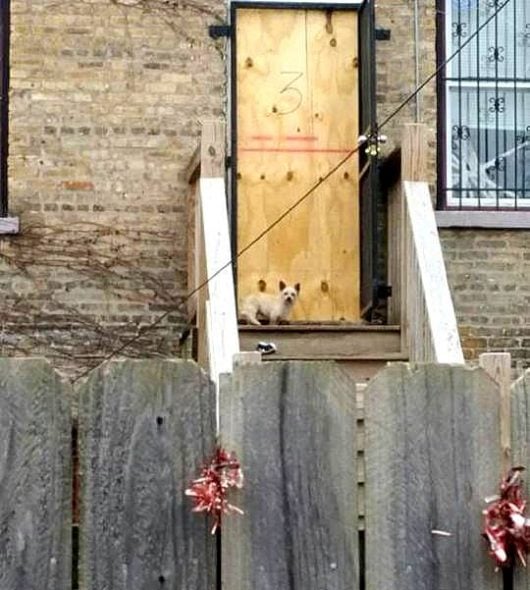 When Aveline’s family moved, they left her behind outside the boarded up house like trash.  TAF rescuers came to pick her up, and she hungrily gobbled up food they gave her.  But it quickly became apparent that she had developed a very serious medical condition.  Now she’s all better, and loving life with her new family.

This Aveline’s story, as told by Trio Animal Foundation:

IN CRITICAL CONDITION, AVELINE CLUNG TO THE DOOR OF A BOARDED UP HOME FOR A FAMILY THAT NEVER CAME BACK FOR HER… 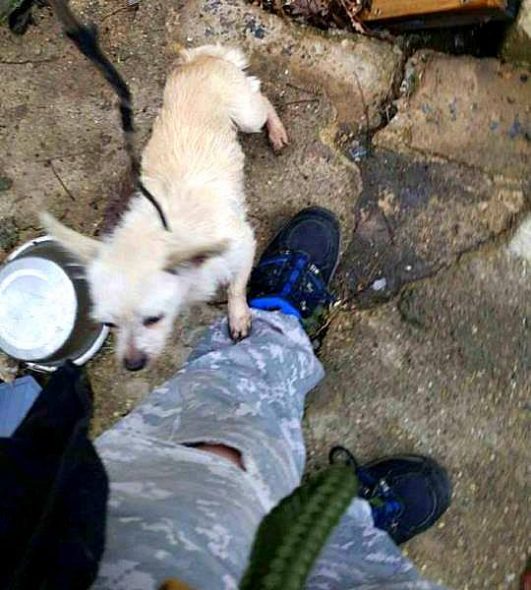 TAF was contacted about a dog that had been left behind by her owners and found near an abandoned, boarded up house. After her rescuers used a large amount of food to catch her, a large mass was seen protruding from her abdomen. Worried that her intestines had perforated, Aveline was rushed to the ER vet.

Aveline’s medical team took one look at her in the lobby and raced her back to begin treatment. With a huge syringe, her medical team was able to pull a large amount of bloody fluid from the bulge. The ER vet wondered if it was her bladder, the loops of her intestines or if her bowel had moved out of her abdomen via an existing inguinal hernia. Aveline was started on IV fluids while her radiologist and surgeon came up with a game plan. 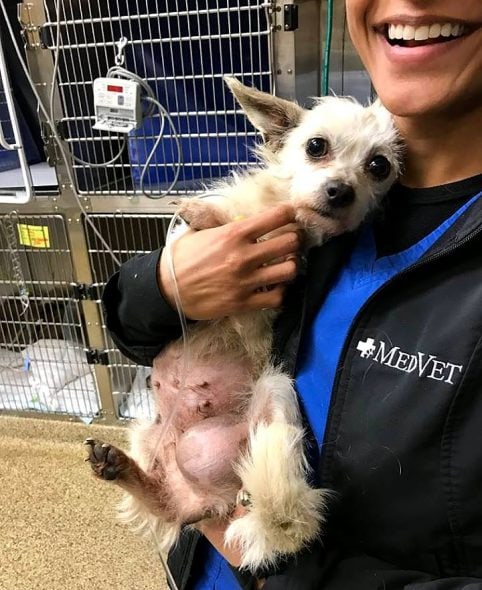 Since Aveline’s stomach was still so engorged with food from her rescue, her radiologist was unable to get a clear read on her ultrasound. At that point, her surgeon needed to go in and figure out what was going on.

Upon opening Aveline’s abdomen, it was discovered that part of her uterus, fat, and a portion of her omentum (the mesh-like tissue that lies over all the abdominal organs) had passed through an inguinal hernia that was present. This is what had caused the orange-shaped bulge that protruded from her groin area. The surgeon removed Aveline’s entire uterus and was able to tuck the rest of the tissue back to where it belonged. He was able to repair the inguinal hernia without complications. 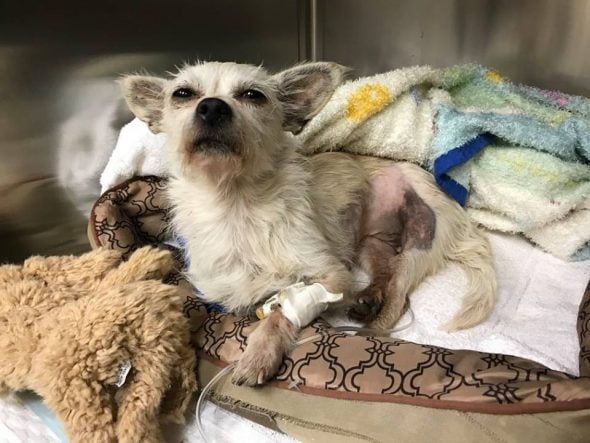 After spending several days in the ER, Aveline was transferred to a foster home where she was on strict crate rest. With sutures running from her ribcage to her groin, Aveline was in pain. What seemed more uncomfortable for Aveline was that the bottom half of her legs/paws were chapped and frostbitten. In addition to this, she was underweight… very underweight. She was constantly itchy and had a ravenous appetite. To make her as comfortable as possible, we pimped out her crate, fed her some pretty amazing food and gave her every medication (holistic and prescriptive) to help her rest and recover.

When Aveline was feeling better, we introduced a couple of TAF’s therapy dogs to her. We knew that she needed the company and it allowed us to get a better read on her personality. 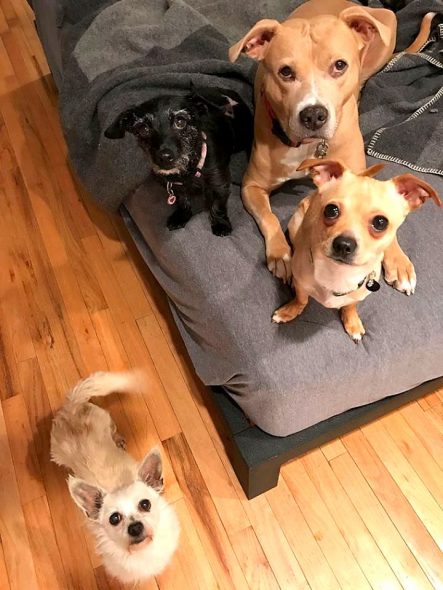 After observing Aveline’s behavior with Miller, Antler and Hazel Grace, we knew that she was definitely on the mend. She had found her little dog bossy terrier voice, was ready to get her stitches out, and find her forever home.

Luckily for Aveline, her future family saw her on facebook and filled out an adoption application. We were thrilled to see that the family interested in adopting Aveline was already part of the TAF family. The family had adopted Terry, who was a fan favorite, from TAF last year. Terry’s original family had left him behind at an open access shelter and, understandably so, he was a complete shut-down terrified mess because of it. Terry would go on to spend weeks in the same foster home as Aveline for some behavioral support. It took a lot of hard work, but with the help of TAF’s therapy dogs, he came around and trusted people again. That is when he met his new mom and dad. 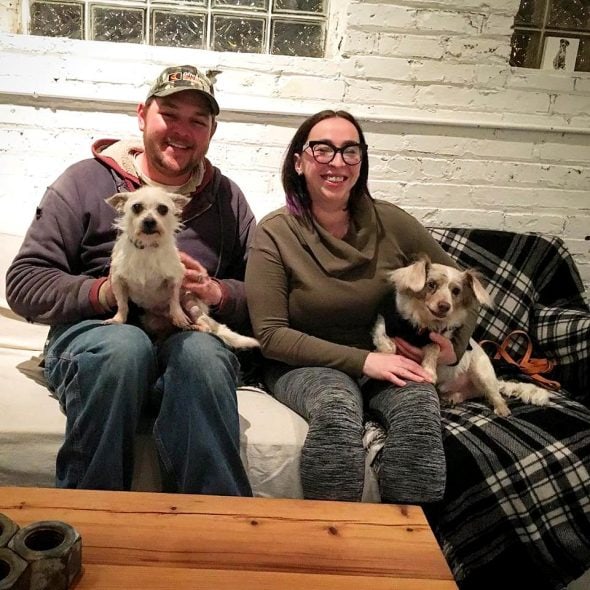 With Terry in hand, Aveline’s future family came to meet her and it was as sweet as you would expect it to be. As we expected, Aveline made the rounds and gave everybody kisses.  She was polite to her new brother and they chilled out as everybody talked around them. Her journey to us may have started in a traumatic fashion but she was leaving us on top of her game… she was happy and she was going home.

TAF would like to thank everybody that donated towards Aveline’s emergency surgery and medical care. Her bills surpassed $4,000 and we couldn’t have done it without you. Also, we would like to thank Michelle for rescuing Aveline and for bringing her to us. It took a lot of people to bring Aveline her happily ever after. 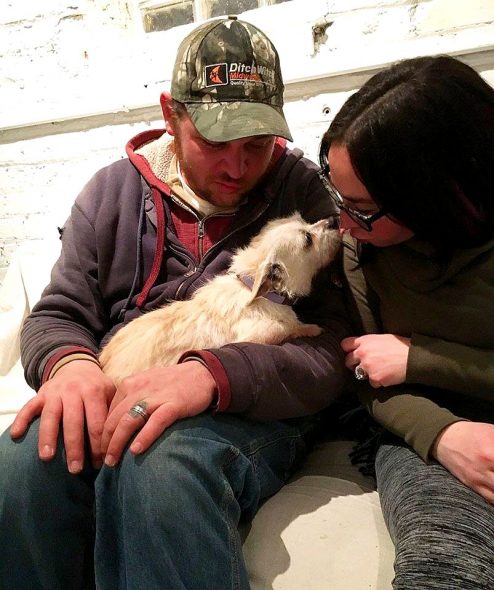