Jeb is a service dog. His owners, Penny and Kenneth Job of St. Clair, MI, adore him. He lives peacefully with three other dogs, seven cats and a coop full of chickens. And so when the a judge pronounced Jeb guilty in the killing of a neighbor’s dog — they simply couldn’t believe that Jeb was capable of such a thing.

And so, reports CNN, they turned to science to save their dog, whom the court had sentenced to be euthanized.

Jeb’s road hasn’t been an easy one. Back in January, 2016, when he was not quite a year old, Jeb was discovered chained inside a shed in Detroit. His owner had passed away. The surviving family didn’t want him. Luck finally found him when he encountered Kandie Morrison, a rescue volunteer. Morrison thought Jeb would make an ideal service dog for her father — Kenneth Job. 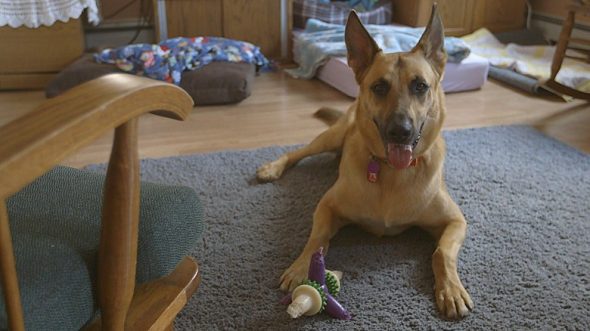 Job, 79, an Air Force vet and dry wall contractor, has a neurodegenerative disease called Charcot-Marie-Tooth. And he fell immediately in love with the expressive Belgian malinois pup. A local vet stepped in to help, training Jeb to keep Job steady on his feet. For eight months, all was well.

On August 24, though, per the court testimony, the Jobs’ neighbor, Christopher Sawa, looked out his kitchen window and saw Jeb standing over the lifeless body of his own dog, Vlad, a small Pomeranian.

Come the court date, Sawa, the Jobs’ neighbor for more than 30 years, testified about the discovery of his dead dog.

“It was horrifying. It was terrifying,” he said, according to transcripts. CNN contacted the Sawas, who declined to comment. He said it wasn’t the first time Jeb scared him. He told the court that he and his wife had no children; Vlad had been like a child to them. (Sawa declined to comment to the CNN story.)

Job admitted that Jeb had gotten away that morning. He and his dog siblings had taken off toward a pond where they liked to swim. The Jobs’ attorney, Edward Marshall, noted the lack of physical evidence and questioned whether another large animal had killed Vlad.

The neighborhood vet had testified that an unfriendly stray dog had been spotted in the are. Foxes, too, are not uncommon.

In the end, though, a reluctant Judge Michael Hulewicz said that Jeb met the legal definition of a dangerous animal, and he made what he said was a tough decision.

“I have no choice except to follow out the state law that the animal would be destroyed,” Hulewicz said. “I don’t like to do this. I don’t like it at all.”

Following the verdict, however, the Jobs asked to have Vlad’s wound DNA-tested, to see if there was proof that Jeb had mauled the little dog. Samples were sent off to the University of Florida College of Medicine. It cost the Jobs $416, and proved well worth it.

Two months after Jeb was “incarcerated” for the offense, AnnMarie Clark, a forensic DNA analyst at the center, sent in her findings: The DNA in the wound didn’t match Jeb’s DNA.

“Jeb is not the dog that killed (Vlad),” Clark wrote.

“We were relieved. We were absolutely relieved,” said Penny Job, Ken’s wife.

The DNA showed that another dog had killed Jeb, Clark told CNN. They may never know that dog’s identity.

Jeb was allowed to go home the following week, after his owners signed an agreement promising that they would make sure Jeb wouldn’t leave the yard unleashed and that they would maintain a secure fence to keep their animals in the yard. They were delighted to have him home, but say that he returned a different dog than when he left. During his stay at animal control, the Jobs say Jeb lost 15 pounds and became skittish — not at all like himself.

“The dog was thin and sick,” Penny Job said. “And he lost all his social skills. He was afraid to go outside.”

“Veterinarians say after a dog is in a kennel environment for an extended period of time, there’s certainly going to be an adjustment period when the dog gets out,” Campau said.

Even now, more than three months after his return home, Jeb is still scared of strange men, his owners say.

Jeb’s owners wonder why they had to come up with the idea of DNA analysis. Why didn’t the court do it before condemning Jeb to death? After all, that kind of testing is often done with human defendants.

Per David Favre, a professor at Michigan State University College of Law and editor in chief of the Animal Legal and Historical Center, it’s an entirely different scenario with dogs.

“In a criminal prosecution, where you’re putting a person in jail, we have the highest level of protection,” Favre said. “Dogs have no rights. They’re property,” Favre said.

He says that making DNA analysis a regular part of the process when a dog’s life hangs in the balance wouldn’t be difficult and applauds the Jobs for taking action to save Jeb.

“Now people will realize they can do this, that it’s a tool,” he said. “They used a very creative defense.”