Many people saw Cupid, shot and emaciated, slowly perishing on the street, but only one stopped.  That one kind-hearted person got him the help he needed, and now this darling is well on his way to recovering.  He’s even getting into normal doggie shenanigans, like snooping through the garbage…

Val’s Pals GSD and Large Paw Rescue has taken Cupid into their care and have been providing updates on his progress on their fundraiser page for him and two other dogs requiring emergency treatment:

February 1st:  We received an urgent plea to help this poor boy. Many people saw this boy and kept going. Lucky for him, someone finally stopped to offer help and be a voice for him.  Estimated to be a year or under. He’s in the most horrible of conditions. 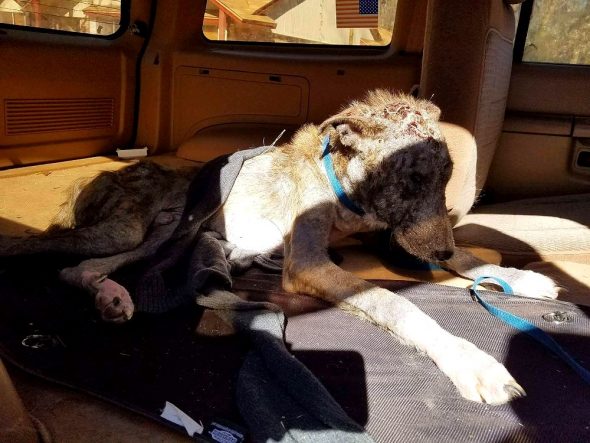 February 2nd:  It will be later tonight, more likely early morning before we know anything for certain. At present, he’s being stabilized, placed on fluids to help with is severe dehydration and a panel of antibiotics.
Full X-rays, skin scraps to determine the type of mange he has; among many other tests are being run. He currently has a grade 4 heart murmur, which is a major concern right now. We need to isolate the cause and go from there. We expect he will be in the ER for the next couple of days.

Please keep him in your thoughts and prayers. We think he’s barely a year old; such a long and happy life still to lead. He’s seen the worst of us; now we can all rally to show him the best of us. 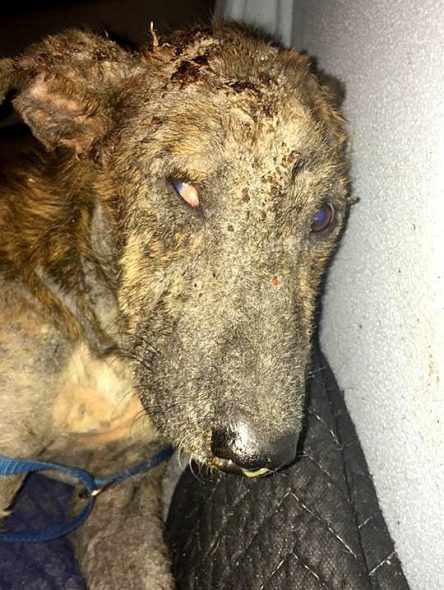 February 3rd:  The good:  he’s full of hook- and roundworms and showing other bacteria in his fecal exam. His blood protein levels are elevated and weighs just 32.3 pounds. Estimated to be between one and two years old, but very hard to tell given his overall condition. He is eating well.
The bad: Cupid’s been shot, likely multiple times. He has some gunshot wounds and his x-rays revealed bullet fragments at his thoracic and cervical spine. Since he’s walking, we believe there to be no spinal injury, but we will need to recheck this as he heals and recovers.
Going forward: he will begin a re-feeding syndrome program and receive additional tests today. His has some gunk in chest and discharge from his nose. We need to make sure there is nothing more severe going on.
He’s eating well and wags his tail as the staff at Vergi 24/7 engages him. He’s fighting and we will fight with him.  We are all his voice now.  His care was estimated at $1,500, but we will need to revise this figure. 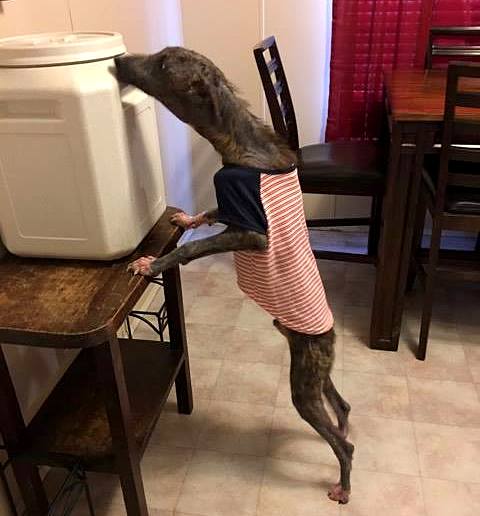 February 5th:  Some good news to report. Cupid remained in isolation this week due to concerns over some respiratory illness and the possibility it was contagious.  The results, which take two-three days, were returned today and they were negative. While awaiting the results, he was being treated for pneumonia.  While he has a long and challenging road ahead, he is being released into a medical foster home to continue his recovery.

Our immediate plan for him:  Continue treating for both demodectic and sarcoptic mange. Skin scrapes are negative for both, but that could also be due to how horribly infected his skin is.  He will continue on a wide range of medications to treat his skin and internal infections.  Re-feeding program due to his severe emaciated state. 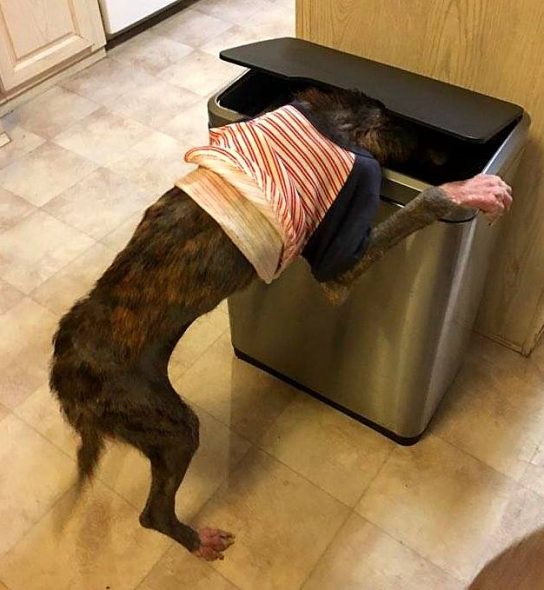 His eye remains a major concern. He will need to see an eye specialist in the near future. We will wait to schedule that when he’s little more healed up.  Bullet fragments are a concern and we may need to address their location later to determine if they need to be removed or not.

Overall, we can see how much of a fighter and survivor Cupid is. He survived on his own for a long time. He survived multiple gunshots. He has literally survived hell on earth at the hands of humans. Thanks to so many supporting our efforts, he can now relax, recover and enjoy the best humans’ kindness, proving once again those doing good will always outnumber those doing harm. 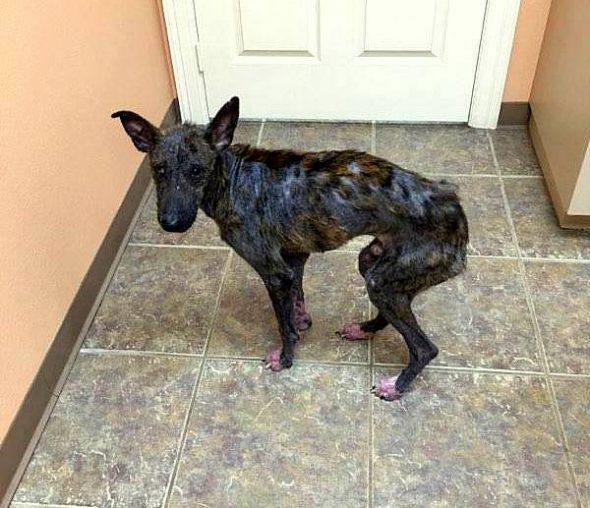 February 7th:  We think these two photos show Cupid is feeling better. He continues to have a long difficult road, but with your help, he’s doing well.

February 12th:  Had his first follow up at the vet on Saturday. He’s heartworm negative, and there are no more worms in his system, but he is Demodex positive. This type of mange is easily treated. His foster was overjoyed at the thought of being able to give him a medicated bath. Cupid is very happy to be cleared for a normal feeding program. Now, we can work more on getting a little more weight on him. 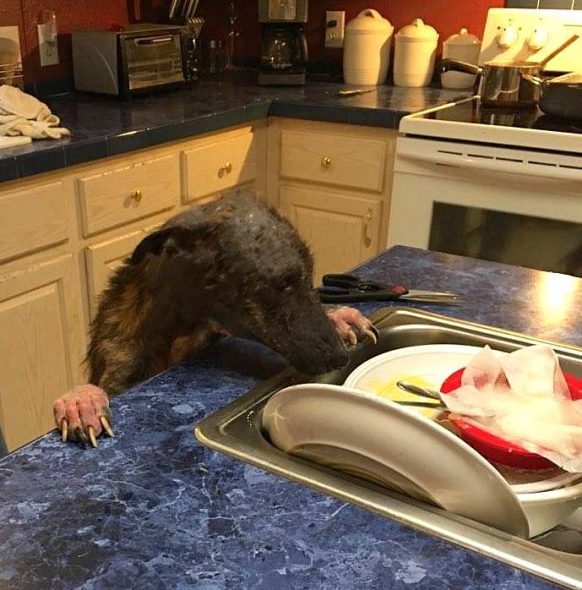 Ongoing issues: Bullet fragments – as he gets more healthy, likely in a month or two, we will need to do another set of X-rays to see if they shifted. The hope is that they will not require removing due to complications a surgery could present.   His eye: our vet does not believe it is causing him any problems right now and there is no infection in it. Seeing eye specialists can wait until he’s more healthy. The bad news here is the vet also thinks it was caused by trauma and he has no use of it. A specialist will likely recommend its removal. We will hope for the best possible outcome on his eye and follow the recommended course of action.

If you would like to give Cupid the best chance of making a complete recovery, please consider donating here. 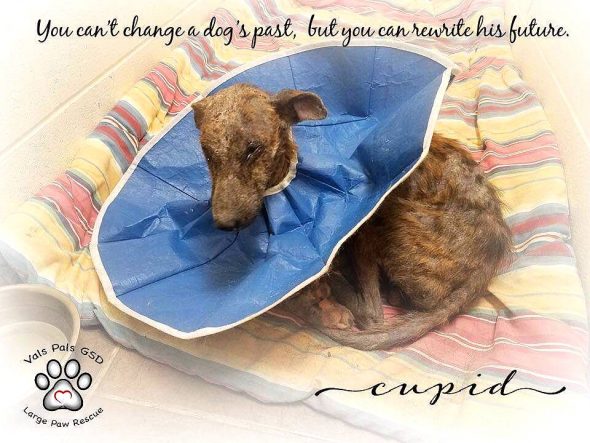