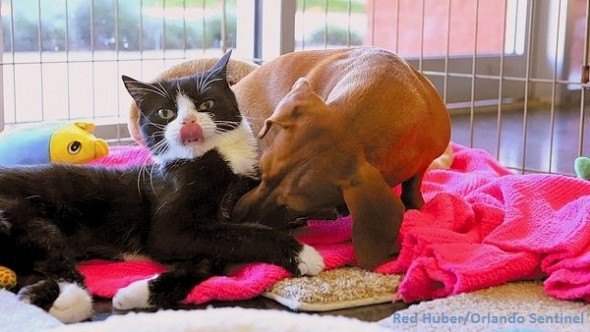 In October, when Idgie the Dachshund was found on the side of a busy road by Seminole County Animal Services, she was not alone. She stood guarding a seven-month-old paraplegic kitten. The two are inseparable, and were adopted together, so now they never have to worry about being apart.

It was still hot out when someone dumped the animals next to a gated driveway in Geneva, Florida, maybe wishfully thinking the homeowner would take them in.

Idgie was protective – barking fiercely when anyone came near. Her companion, Ruth, could only move by pulling her hind legs around. The back paws were twisted and nonfunctional.

“We actually don’t know what’s wrong with her,” said Diane Gagliano, program coordinator for SCAS. “We think it may have been something she was born with. It was really a strange situation — both of them were found in fairly good shape, not filthy or malnourished, so it seems as though they probably had a home at some point. But on the flip side, no one came and claimed them, and how could the cat get very far without the owner knowing?”

Ruth was given steroid injections, but they had no effect. Nonprofit organization TEARS (Together Every Animal Receives Support) paid for her to have a series of acupuncture and experimental therapy. Each session cost $150, but nothing helped. Having Ruth taken away from her caused Idgie to become distraught.

“It was like she was constantly looking for her,” Diane said.

Jackie fell in love, and now Ruth and Idgie spend their days in the boutique. They have a large pen by the front window to nap in, with Idgie curling herself around her friend. Ruth is moved and bathed daily, and Idgie gets walked by everyone on staff. They both get plenty of treats and attention from employees and clients. But if another dog gets too close, Idgie warns them away.

“Otherwise, she’s a total sweetheart,” Jackie said. “I mean, we’ve seen friendships between dogs and cats before, but never anything like this.”

The girls were named after the two lead characters in Fried Green Tomatoes, Idgie Threadgoode and Ruth Jamison.

“They stuck together through everything,” Jackie explained. “Idgie would take a bullet for that cat.”