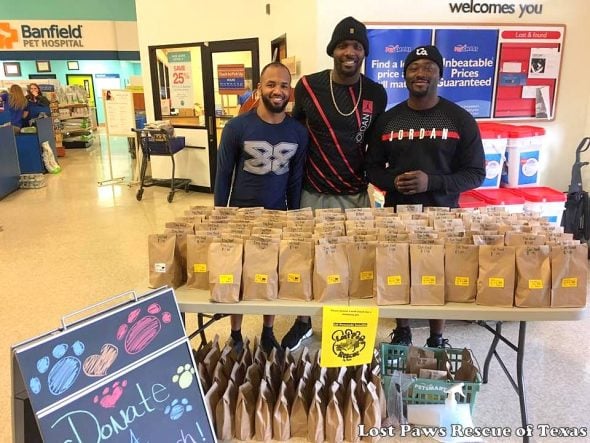 It’s always great when big stars – particularly football players *ahem* – use their celebrity for a good cause.  Dallas Cowboy Dez Bryant recently did just that when he helped a rescue group by buying up their whole table of food they were selling to raise money for their rescue dogs.

Lost Paws Rescue of Texas is a small group, and they rely on donations to help as many dogs and cats as possible get spayed, neutered, fed, medically treated, housed, and adopted.  And in Texas, there’s no shortage of dogs being dumped on the streets regularly by people who can’t be bothered to care for them.

The rescue had set up a table at a PetSmart in Southlake (just north of Fort Worth and Dallas), hoping that customers buying food for their own pets would feel generous enough to support them and buy a bag for their shelter animals.  Wide receiver Dez Bryant came in with a couple of his buddies, and he was kind enough to buy the whole lot!

“Thank you to Dallas Cowboys wide receiver Dez Bryant for supporting Lost Paws Rescue of Texas,” the group said on Facebook.  “Dez purchased this entire table of pet food for the dogs in our rescue group.”

Children emulate the adults in their lives and idolize footballers for their athletic prowess, so it’s fantastic when their heroes do good deeds that make them truly worthy of such veneration.