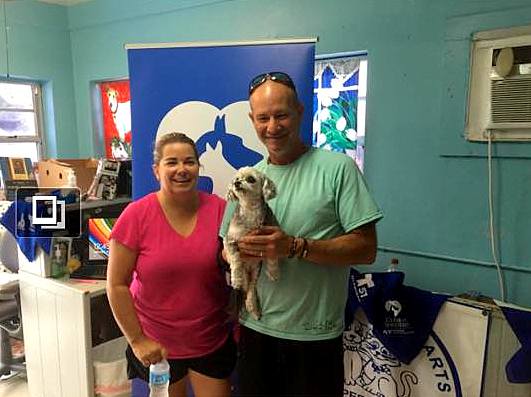 At 12 years old, the chances of Linda finding a home were low, and time was running out.  Being nearly blind and deaf, the odds grew even slimmer.  But after spending half of her life behind shelter bars, she’s now in a loving home – for good.

A couple weeks ago there was a nationwide Clear the Shelters event, leading to the adoption of nearly 20,000 animals.  Linda was one of them.  The poodle mix had spent the last six years living at the Upper Keys Humane Society, and finding her a home seemed hopeless.

According to manager Karla Perrine, Linda had been found, malnourished and abandoned, outside of a Homestead Costco in 2009.  The good Samaritan took her home for a few days before taking her to the Key Largo shelter.  Luckily she was adopted soon after.

But Linda was returned only months later, because her new owner discovered that the dog was beginning to go blind, and surgery would be way too expensive.  So for six long years, Linda waited.

Kellie and Joe Pardo had gone to the shelter to make a donation, and fell in love with the unfortunate dog.

“We just lost a Jack Russell terrier,” Kellie told Florida Keys News. “And we both said the next dog we would get was going to be one that no one else wanted.”

Because they weren’t looking for the perfect dog, the Pardos found the perfect dog for them.  Linda has some disabilities, but is very perky and playful, and has a hearty appetite.  She’s now adjusting to her new dog siblings, Bailey and Lola, and is just loving being free and loved.